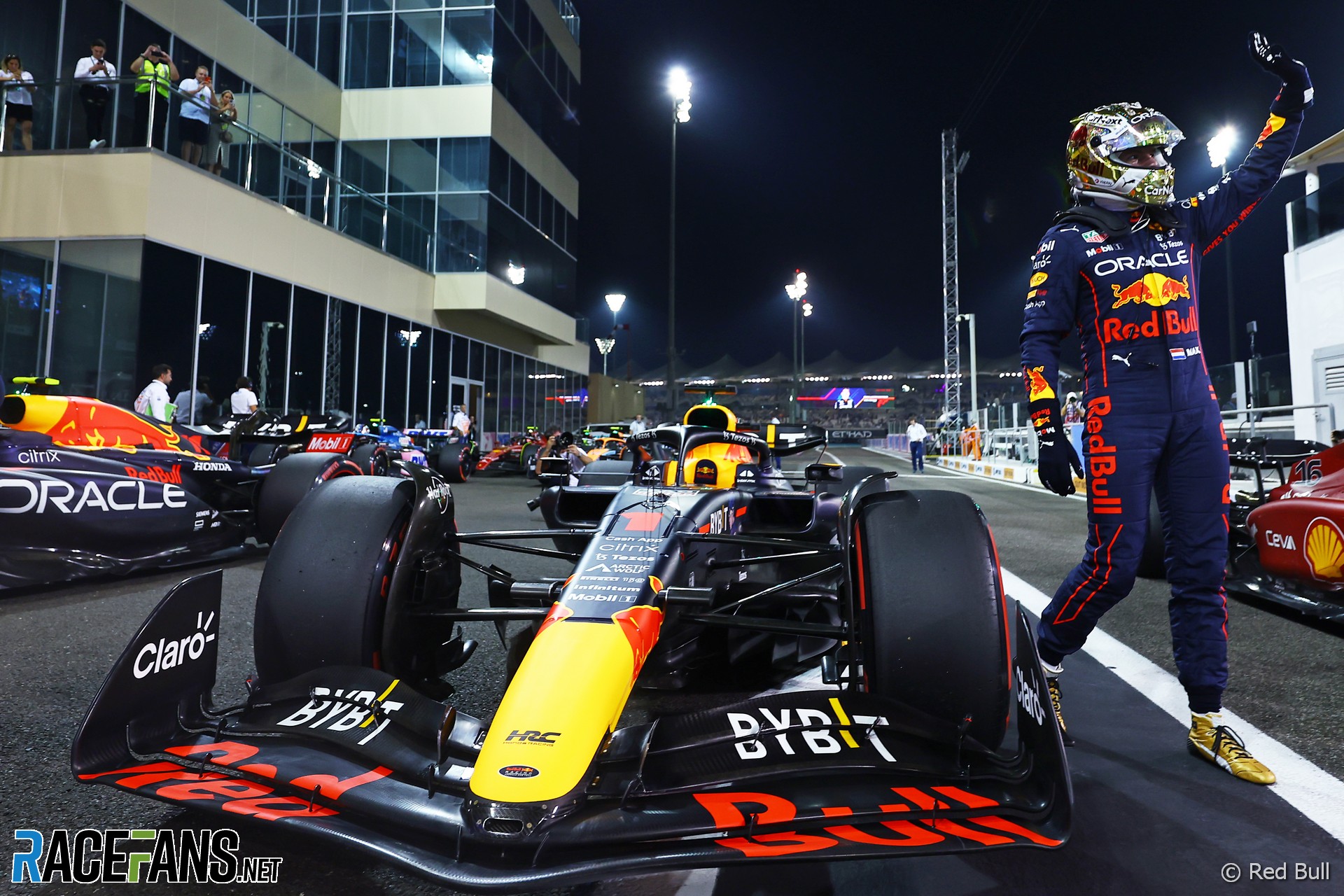 In what could go down as the most successful seasons any Formula 1 team have ever enjoyed, it’s strange to think that it took only until the final race of the 2022 season for Red Bull to secure their first front row lockout of the year.

With Ferrari and Charles Leclerc enjoying most of the success on Saturdays this season, Verstappen’s pole in Abu Dhabi was just his seventh of his second championship-winning campaign. With Sergio Perez taking second on the grid, Sunday’s race will only be the first time two Red Bulls have shared a front row since the 2018 Mexican Grand Prix.

Red Bull team principal Christian Horner has had a lot to cheer about over the course of the year, but he was unsurprisingly thrilled at the prospect of punctuating the season with Red Bull’s most dominant showing.

“We are tremendously happy with the performance as it gives us an opportunity to end our most successful season in the best possible way,” Horner said. “We couldn’t have asked for a better Saturday, but there is still a lot to do. Now we must focus on converting this into the best possible result.”

That Verstappen was the one on pole was of little surprise. What was unusual was that Perez had found the pace to back up his team mate and beat the Ferraris and Mercedes in the process. But part of that could have been thanks to with Verstappen himself. By giving Perez a tow along the two main straights, Perez was the only driver to break 330kph. Did that boost help him to secure a front row start?

“Yeah, it certainly did,” Perez said. “I think we worked really well as a team today. And I could feel, especially sector two, it was working. What you gain, you lose a bit in sector three, but generally, I think certainly it was a positive thing.”

The recent resurgence of Mercedes came to a halt in Yas Marina. Ferrari were closest to the Red Bulls on Saturday – a stark turnaround from how things looked just 24 hours earlier. But heading into the final race of the season, who did Verstappen see as the biggest threat to Red Bull – Ferrari or Mercedes?

“It’s difficult to tell at the moment,” Verstappen said. “I think, from our side, we looked good in FP2 with the long run and it seemed like both Ferrari and Mercedes seemed to struggle a little bit more at the time. But I don’t know what they have done overnight so I guess we’ll find out tomorrow.”

Leclerc was only half a tenth off from Perez and had actually gained considerable time on him through the final corner, suggesting that, on raw single lap pace alone, Ferrari are not too far off from at least one of the Red Bulls. But Leclerc is not sure whether they will be able to keep in touch over the race.

“It’s difficult to know for now,” said Leclerc. “We had a difficult FP2. During the race simulations, it felt definitely quite a bit better this morning, but we had no reference. So it’s a bit of a question mark for now. I feel like we are in a better place compared to yesterday – whether this is enough to beat the Red Bulls tomorrow, I don’t know yet. But we’ll give it our all.”

As races at Abu Dhabi tend to be fairly pedestrian and Ferrari were admittedly struggling with tyre degradation over the course of their high fuel runs on Friday, they could take a gamble on an aggressive strategy. Unlike last year’s race, which was an easy one-stopper until a VSC and a Safety Car complicated the picture in the later stages, Pirelli are firmly expecting a two-stop strategy will be the best option due to the increased tyre wear expected. But could Ferrari try something different with Leclerc or team mate Carlos Sainz Jnr to avoid having to win a straight fight against Red Bull?

“We’ll have to see once we are in the race and what are the opportunities at that moment,” said Leclerc. “Obviously Carlos is starting right behind me and hopefully we can put a bit of pressure on Checo by doing different things.”

But while Ferrari will be looking to move ahead in the race, Mercedes will be aiming just to stay in touch with the Ferraris. Fifth and sixth was a disappointment, but not as much as the margin their rivals held over them.

“We came here expecting this to be a difficult one for us but we didn’t expect a gap of eight tenths to pole position,” Lewis Hamilton admitted. “I gave it everything, so it’s a bit of a surprising result and just being so far behind Red Bull and Ferrari. Hopefully our race pace tomorrow will be better than our qualifying pace today.”

Hamilton was briefly up on Verstappen’s pole time through the first sector, until hitting the brakes for turn five – the same point that Verstappen passed him to snatch the championship away during the fateful final lap last year. While both Hamilton and Russell lost time to the four cars ahead down the two long straights, Hamilton was on course to beat Sainz to fourth before a mistake through turn 14 under the hotel likely cost him the position.

But despite a disappointing Saturday, Mercedes team principal Toto Wolff has last year’s race firmly in his mind – when Red Bull had the upper hand in qualifying only for Mercedes to take back the advantage in race pace.

“It’s top speed versus tyre saving,” summed up Wolff. “So we shall see tomorrow if we can really gain an advantage and be happier with the tyres.”

Beyond the fight for the win – however much of a fight it may be – there are two important battles to be decided on Sunday, neither of which being the sideshow of who will finish second in the drivers championship.

McLaren’s slim chances of overtaking Alpine for fourth place were aided by Lando Norris out-qualifying Esteban Ocon, while Fernando Alonso failed to reach the top ten. But Norris knows he and team mate Daniel Ricciardo do not control McLaren’s destiny in the race.

“This has probably been our best weekend for quite a while in terms of pace against them,” Norris explained. “So we’ve given ourselves as many opportunities going to tomorrow that we can. The rest is not down to us, the rest is down to misfortune or fortune either way. But we’re in a really good position to score some good points tomorrow so we’ll do that and hope the rest just goes our way.”

Alonso has made a habit of executing strategies effectively to move up the order during races. It appears he’s aiming to attempt the same during his final race with the team. “We are one of the few teams that has two hard tyre [sets],” Alonso explained. “So maybe we can use that in our advantage tomorrow in the race.”

Alfa Romeo need to avoid being out-scored by more than five points if they are to cling onto sixth position in the championship. With Valtteri Bottas eliminated from Q1, Zhou Guanyu knocked out in 15th in Q2 and Sebastian Vettel solidly in the top ten, it’s going to be a nervous final 58 laps of the season for Alfa Romeo.

“We went into qualifying knowing we had good pace, so I believe today’s result doesn’t really reflect where our car actually is,” claimed Bottas after his Q1 exit. “It was a strange feeling, we just couldn’t get the tyres to work in our out-lap and, as a result, our sector one pace suffered. It’s frustrating, of course, but now we need to prepare in the best possible way for tomorrow’s race.”

But no one will be as motivated heading into Sunday’s race than Sebastian Vettel. In what looks likely to be his final grand prix start, the retiring Aston Martin driver will be looking to end his illustrious career on a high with enough points to gift his team an extra position at a circuit that has been so kind to him over the seasons.

“Absolutely, we’ll try to do that,” Vettel said. “We’ll see what happens. I feel we have the right tyres with us and it should be a good race.”

Is there any realistic chance Red Bull will be beaten to victory on Sunday? How will the other championship fights be decided?

Share your views on the Abu Dhabi Grand Prix in the comments.

RaceFans is run thanks in part to the generous support of its readers. By contributing £1 per month or £12 per year (or the same in whicheer currency you use) you can help cover the costs of creating, hosting and developing RaceFans today and in the future.

7 comments on “As Red Bull hold all the cards up front, the finale’s best fights are in the midfield”