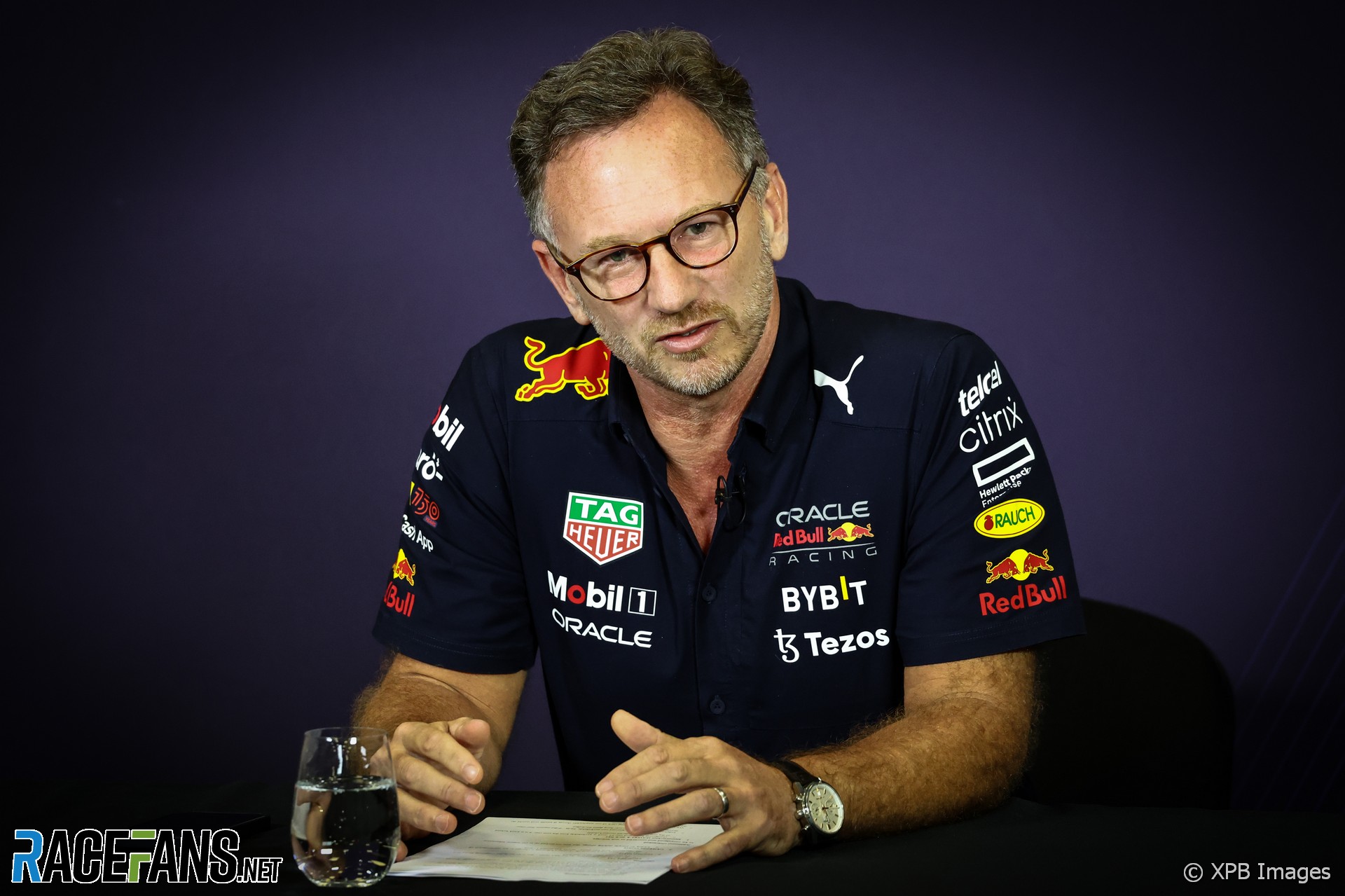 Red Bull team principal Christian Horner has explained how its team came to exceed the Formula 1 budget cap in 2021.

The FIA announced today the team has been fined $7 million (£6.04m) for the breach and given a 10% reduction in its aerodynamic testing allocation for 2023.

Before the FIA’s decision was announced, Horner repeatedly insisted the team’s cost cap submission was within the limit set by the sport’s governing body. Today the FIA confirmed Red Bull’s submitted costs amounted to £114.293m, inside the cap of £118.036m.

However the FIA judged Red Bull had “inaccurately excluded and/or adjusted costs amounting to a total of £5,607,000.” Once those were added, Red Bull had over-spent by £1.8m.

The FIA originally planned to issue cost cap certificates to teams on October 5th, but postponed its announcement. Horner was informed of their decision four days later, in the aftermath of Max Verstappen’s championship win at Suzuka.

“Ninety minutes after Max Verstappen had won the the drivers world championship in Suzuka, I was informed that we were in fact in breach of the regulations to the tune of 1.8 million,” he told media including RaceFans at Autodromo Hermanos Rodriguez today.

“Again, we were hugely surprised by that having felt that we’d countered each of the points that have been been discussed.”

The Financial regulations define with costs should be included within a team’s submission – i.e., spending which does count towards the budget cap – and which are excluded. It transpired Red Bull had both failed to fully account for items which should have been part of their cost cap submission, and vice versa. Some included costs were excluded and one particularly significant excluded cost was included.

This related to a tax payment. The FIA noted that “RBR [Red Bull Racing] applied the correct treatment within its Full Year Reporting Documentation of RBR’s Notional Tax Credit within its 2021 submission of a value of £1,431,348, it would have been considered by the Cost Cap Administration to be in compliance with Article 4.1(b) of the Regulations and therefore RBR’s Relevant Costs for the 2021 Reporting Period would have in fact exceeded the 2021 Cost Cap by £432,652 (0.37%).”

Horner pressed home the point that the team’s overspend could therefore have potentially been far less than it was had all its paperwork been in order.

“The FIA accepted that there were mitigating factors in particular to one specific item where, essentially we had overpaid within the cap the amount of tax,” he explained. “We hadn’t excluded 1.4 million pounds-worth of tax that was an excludable item.

“So when you take that into account that £1.8m breach becomes as the FIA clearly states in their release, down to little over £400,000. So a 0.37% breach is essentially what we’re talking about.”

Horner also believes Red Bull missed out on the opportunity to reduce their costs relating to unused parts. He suspects rival teams were able to take advantage of this.

“[There] was a change to the regulations in June after the submission that, had we been allowed to resubmit, would have had a benefit to us in the region of 1.2 million pounds of unused parts and the way that those unused parts are accounted and treated,” he explained. “That we believe has been adopted by other teams within their submissions.”

According to the FIA, Red Bull acknowledged it incorrectly excluded or adjusted 13 separate costs which should have been included. Horner explained some of these were relating to their catering costs, sick pay and staffing.

“The FIA took a different viewpoint on that and said that food was not excludable. Fair enough. But what was included was the entire catering bill of the entire company. So £1.4 million worth of food, drink, coffees – any of you [media] that attended Milton Keynes during the last 12 months have contributed to our overspend. Red Bull Powertrains have nothing to do with Red Bull Racing, its activity this year the costs are included. So there’s a difference of opinion on how that was applied.”

Red Bull and the FIA also differed over the inclusion of sick pay for an unwell employee, said Horner. “We have always taken a view that we wanted to support our staff, in sickness and in health, and when members of staff have been on long-term sick we have supported them as we will continue to do in the future.

“We felt that the sick pay, because the role played no function in the grand prix team for a period of eight months, was an excludable costs. Unfortunately, the regulations can be interpreted in two ways.”

One aspect of the regulations Horner highlighted meant that, “had the person died, which thankfully they didn’t, the cost would have been excludable.”

He also questioned whether it was correct to include the salary of a member of staff who had moved from the F1 team to another department prior to joining a rival.

“We had a senior member of staff on a fixed-term contract, that was offered a Hollywood-style offer from another team, and at that point, you can see that their heart and mind is not within your company. And so they were transferred from the Formula 1 activity into our Advanced Technology activity which is currently designing the RB17 [road-going hypercar] and America’s Cup projects amongst a myriad of other projects.

“The individual then left the company from there but the time that he was spent not in the Formula 1 activity was included in the cap. So again, something that we vehemently felt was an excludeable costs.”

Despite their disagreement over the inclusion of those items, which Horner believes “probably come in excess of three to three-and-a-half million worth of value”, Red Bull chose to take the penalty detailed by the FIA in an Accepted Breach Arrangement. He said the alternative was a potentially drawn out legal row.

“Had we dragged it out through the administration process, to go effectively to appeal, that could have taken months. And then beyond that the International Court of Appeal could have taken further months. So we could have been looking at a 12-month period to have this situation closed.