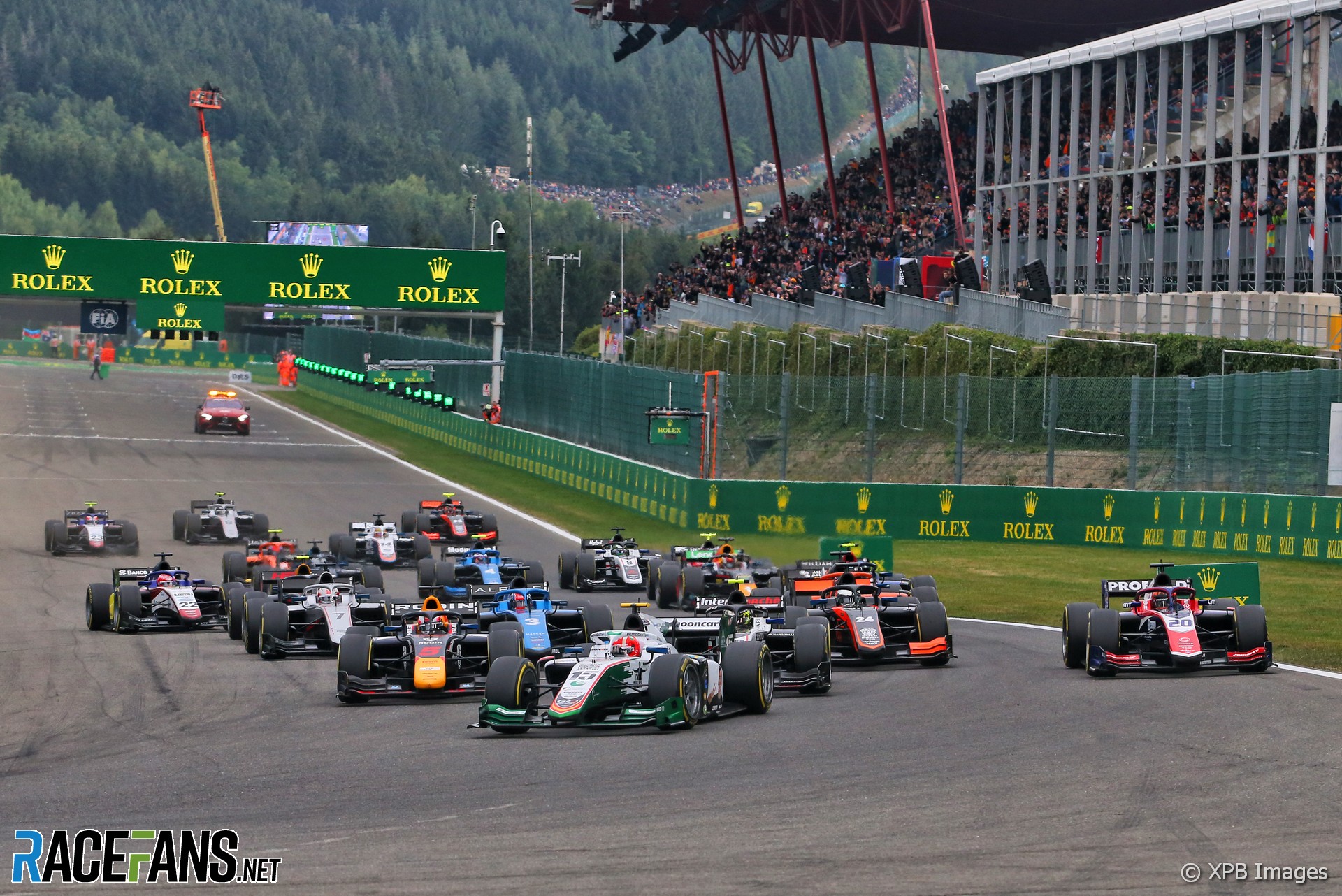 Formula 2 and Formula 3 will serve as the testing ground for Formula 1’s switch to sustainable fuel in 2026.

From next year, Aramco will provide the junior series with an evolving sustainable fuel mix, from bio-ethanol to purely synthetic. This will pave the way for F1 to go fully sustainable when its new engine regulations are introduced in 2026.

From then F1 teams must use 100% sustainable fuel, made either from genuine waste and non-feedstock bio produce or from synthetic processes that construct petrol molecules. In the run up to this, Saudi Aramco will become fuel supplier to F2 and F3, introducing first bio-ethanol-derived non-fossil petrols and then fully synthetic fuel.

Both types of non-fossil petrol are permitted in the 2026 F1 regulations. Bioethanol-derived sustainable fuels are currently easier to make in bulk and are already used by some FIA series, like the World Endurance Championships. Unlike the 10% ethanol introduced to F1’s fuel mix this year, the fuel is a complete petrol, the ethanol having been changed by being catalysed to take on more hydrogen.

The most sustainable form of synthetic petrol is created by capturing carbon from the air as CO2, then combining it with hydrogen through electrolysis of water powered by renewable energy. The process then builds the hydrogen and carbon into a fuel that can be refined into petrol.

The reason why F2 and F3 were selected was explained by F1 technical director Pat Symonds earlier this year. “Formula 2 and Formula 3 use a single type of engine, they use a single type of fuel,” he said. “So we’ve got to do the job once. And, to be honest, it doesn’t have to be perfect.”

F2 and F3 cars currently use LMS 102 RON unleaded petrol supplied by Elf. Formula 2 technical director Didier Perrin said this specification will be matched by the 2023 fuel, which will introduce a 55% sustainable mix.

Aramco’s development programme for F2 and F3 will see it first use a bio-ethanol derived ‘drop-in’ petrol for the initial 55% sustainable mix. Along with the 45% fossil fuel-refined petrol, this will be an unleaded petrol that matches the current formulation.

“We intend to have drop-in fuel to use the existing engine for 2023 and complete the same formulation for 2024,” explained Pierre Calendini, Aramco’s Fuel Research Centre director.

Calendini said the intention is to gradually ramp up from biologically-derived fuels to fully molecularly-constructed fuels, made using captured carbon from the air and sustainably-sourced hydrogen. “So our next step will be in 2025 and 2026 to start to include the synthetic components and then to pave the way for Formula 1 for 2026 with a fully sustainable fuel and come with a fully sustainable fuel in 2027 for F2 and F3.”

That plan, to gradually increase the amount of synthetic petrol involved, is to speed up introducing sustainable fuel without waiting for production capacity, said Calendini. “The strategy with biofuel is that it’s a way to get what we call sustainable components. Fuel is a blend of different molecules and we can start very quickly to use bio-sourced components that are very close to what we will produce in 2024 and then use it to to build off a quick start and a first step.”

“Then cohesively we introduce and increase the quantity of molecule made through synthetic process,” explained Calendini. “Synthetic fuel is a large programme. We are currently investing into two pilot production [plants], one in Saudi Arabia and one in Spain.” The total production of these is estimated to be 2.6 million litres per year, including fuels for cars and aircraft.

“So that would bring in 2024 one of the largest pilot production for synthetic fuels,” Calendini continued. “And then we will use our resource molecules to make the fuel for F2, F3 and also to think about Formula 1 for the 2025, ’26, ’27 fuels.”

Perrin emphasised this is also part of F2 and F3’s plans, in alignment with the FIA’s intention that by 2027 every one of its series will use only sustainable fuels, with nothing fossil-derived.

“We have a big ambition with Aramco and F2 and F3,” said Perrin. “We want to be sustainable with synthetic fuel and carbon dioxide capture in ’27, it’s much more ambitious than being only sustainable.

“From that target, we build up a road map with a couple of steps, and the first step will be in 2023 to start with sustainable fuel. But the development will continue until we reach the really ambitious target of being fully sustainable and synthetic in 2027.”

F2 will continue to use the same engine formula next year but has issued an invitation for manufacturers to tender for a new engine from 2024. However Perrin says it won’t be necessary to alter the existing hardware to accommodate the first examples of the new fuel.

“Regarding the engine for the moment and for ’23, ’24 to introduce the fuel in these engine, we will not have to make hardware changes,” Perrin states. “Maybe from ’25 and for sure from ’27 we might have to do some adjustment on the hardware, for example the injectors or something like that, but for the moment, for ’23 and ’24, the introduction of the new fuel is with exactly the same engine, just a different mapping, which is the beauty of it.”

“Basically, we do not intend to make any change to the cars for next year,” explained Perrin. “This is the beauty of this project, we are developing the engine with the new fuel for 2023. The engines are currently on the dyno and so far we didn’t need to make any hardware change to the engine, just to adapt the mapping to the new fuel. So it’s really good for the teams, it’s really good for us. And everything is going very well so far with the existing engines.”

Can this all be done without sacrificing reliability in a closely-fought series where a single retirement could swing the outcome of a championship, upon which a young driver’s career prospects might hang? When F2’s current chassis and engines were introduced in 2018 teams encountered several technical problems which temporarily led the series to abandon standing starts.

Team bosses expressed concerns earlier this year that the introduction of sustainable fuels could affect reliability again. Perrin played down those fears.

“But we are very confident that, reliability-wise, to be completely transparent we expect exactly the same level of performance and level of reliability.”

F2 CEO Bruno Michel said last week he is confident the series’ comprehensive testing regime for its sustainable fuels will weed out any problems.

“We are doing every test needed for all the pre-screening and the screening of the fuel we are going to use next year and I can tell you for sure that the fuel is not going to be a reliability issue at all,” he said in response to a question from RaceFans.

“But as I said, we’ll do whatever it takes in terms of testing because as you can imagine, before introducing a fuel, we go into a very heavy development programme and at the moment we have engines and the fuel that we are going to use next year being on a dyno for hours and hours and hours before we put it on the track, on our development car, and before we are going to introduce it for everybody. So I really don’t think that we will have an issue in terms of reliability because of the fuel.