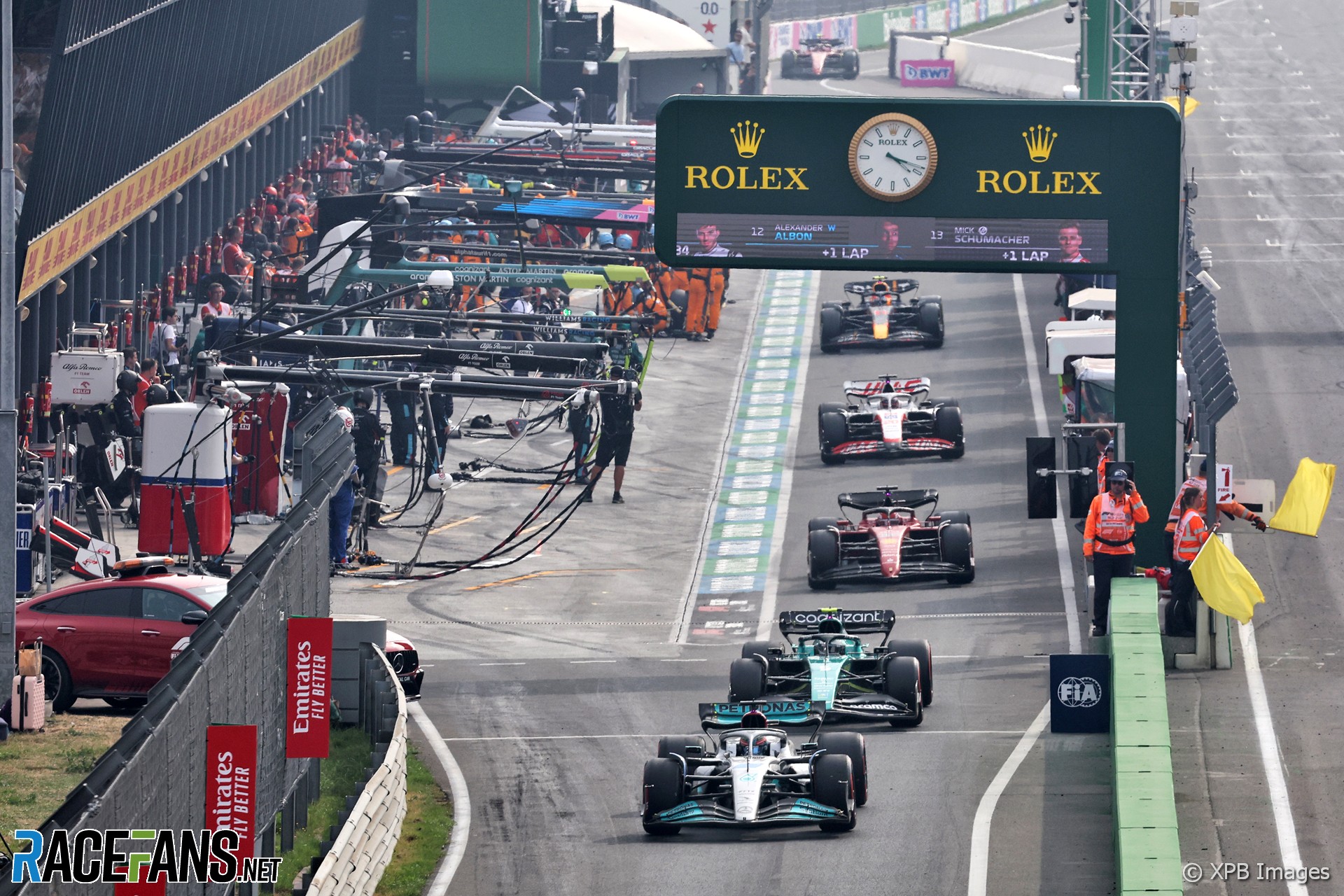 Lewis Hamilton and George Russell reacted in completely different ways in the critical moments which swung the outcome of the Dutch Grand Prix.

The pair moved into the lead when the Safety Car was deployed with 16 laps to go and Red Bull responded by bringing Max Verstappen in from the front of the field to fit soft tyres to his car. That left the Mercedes pair leading, both on the medium tyres.

But while Hamilton was content to remain in the lead of the race on his older rubber, Russell behind him immediately questioned whether they should switch to the soft tyres. After a brief debate, Russell won his team over, and changed tyres.

Hamilton was crestfallen when he saw what was unfolding. He immediately realised his chance of holding onto the lead would be seriously compromised without Russell’s car behind him on the same rubber.

Sure enough, once the race restarted Verstappen shot past Hamilton and went on to win, while Russell picked off his team mate on his way to second. Here’s how it unfolded.

Hamilton and Russell’s radio messages from the Safety Car period

Mercedes were alert to the possibility of the Safety Car being deployed as soon as Valtteri Bottas brought his Alfa Romeo to a stop on the pit straight. With little room to move it out of the way, a Safety Car looked inevitable.

Hamilton’s thoughts immediately turned to Verstappen ahead of him. Knowing the Red Bull driver was on the hard tyre compound, Hamilton suspected he might pit and avoid being left vulnerable at a rolling restart on a hard tyre compound. Sure enough, Red Bull brought Verstappen in for a set of softs.

In contrast, even before Verstappen was called in, Russell immediately questioned the team’s decision to stay on the medium tyre compound. He told them he was happy to risk switching to the soft tyres if it meant losing a position to the next car in the queue, Charles Leclerc’s Ferrari.

Curiously, at this point Mercedes told him they planned to split the responses between the two drivers but that Hamilton would be called in. This was either a mistake or the team swiftly decided against it:

Leclerc also pitted. Russell was by now more concerned about his tyres, which were the same age as Hamilton’s, and saw he could rejoin the track ahead of the Ferrari if he pitted. With the cars filtering through the pit lane to avoid the recovery scene at turn one, he urged his team to let him stop, and this time they agreed.

As they passed through the pits, Hamilton saw the tyres waiting for his team mate and was immediately concerned. He had expected Mercedes to leave Russell behind him, giving him some protection from Verstappen at the restart, but that vital buffer was now gone.

Speaking after the race, Hamilton said he realised he was in trouble as soon as he saw Russell was about to pit. “When [the Safety Car] came out I just followed the direction, I didn’t think anyone was going to stop,” he explained.

“When I pulled past my pit box I saw the soft tyres were out and I saw it was happening into George. In that moment, I was like, hold on a second? So kind of then my hope started to fade a little bit.”

However Russell said the team made the best gamble available to them by splitting their drivers’ strategies. “As a team it was an incredibly difficult decision because had we both pitted, we would have conceded the position to Max,” he said. “Had we both stayed out, we probably both would have lost out to Max as well.

“So the best chance we as a team had of victory was splitting the cars, one to stay ahead of Max, one to stay behind and see what happened. If you could have just got those tyres restarted, it could have been different but it was always going to be very, very challenging for him.”

Once race control moved the lapped cars out of the way the race was ready to restart, with Hamilton leading on medium tyres ahead of Verstappen, Russell and Leclerc on softs.

Hamilton warned his team it wouldn’t be easy to keep his lead. Once the race resumed, Verstappen overtook him before turn one. Russell and Leclerc followed within the next few laps.

Russell asked his team if he could use ‘strat nine’ – a setting which optimises the car for higher performance – for the restart. He was told he couldn’t due to concerns over temperatures. When the race did restart Hamilton was reminded to select ‘strat five’. He appears to have done this too late, as he admitted afterwards, which likely also helped Verstappen pass him.

RaceFans is run thanks in part to the generous support of its readers. By contributing £1 per month or £12 per year (or the same in whichever currency you use) you can hlp cover the costs of creating, hosting and developing RaceFans today and in the future.