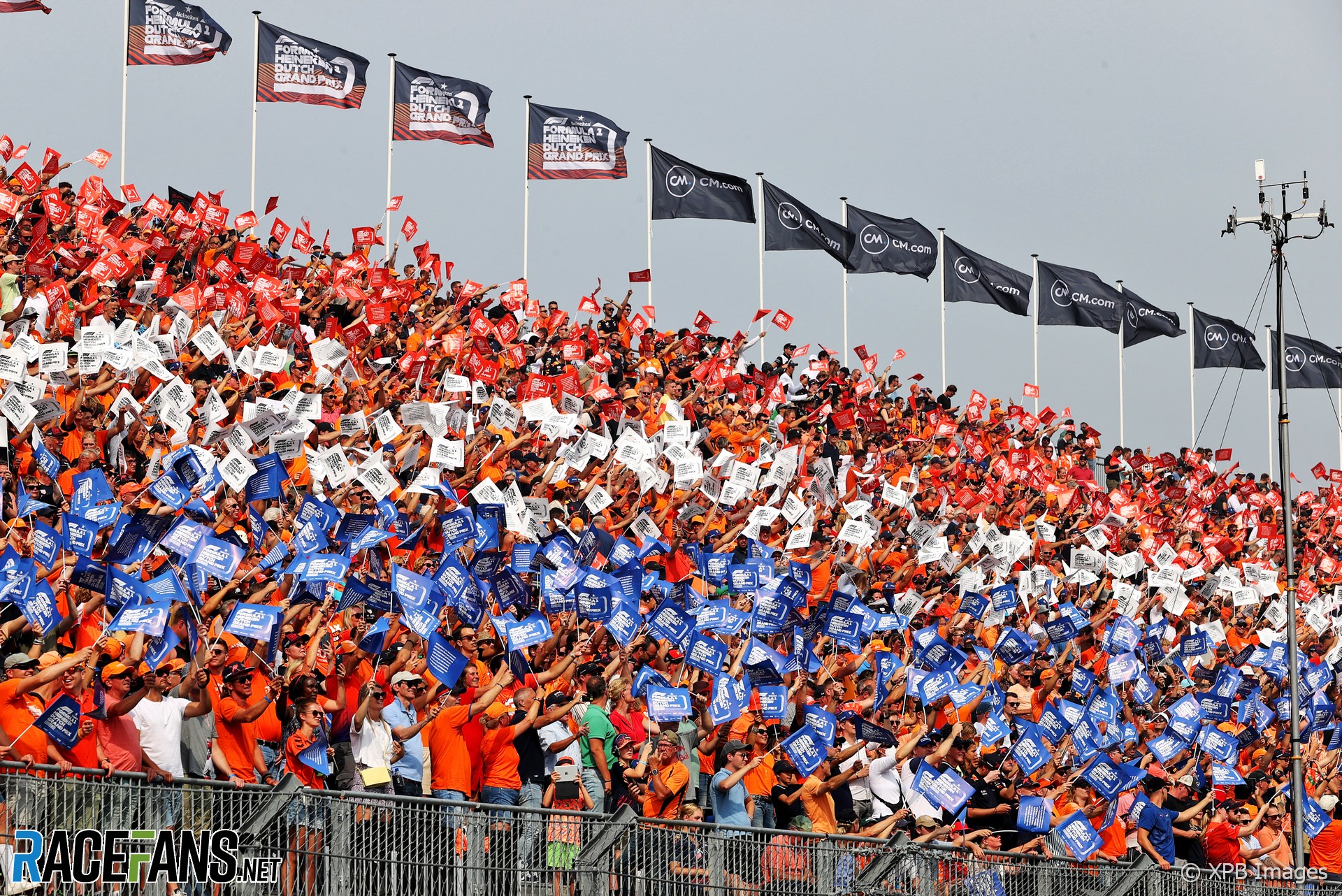 As my alarm chimed at 4:20am I immediately regretted my decision, several weeks earlier, to drive across to Zandvoort from the UK on the morning of press day. Not least because since I had secured an exclusive with Max Verstappen – yes, the world champion on the eve of his home race – and a limited interview session with Lewis Hamilton for later in the afternoon.

The six-hour journey was long, but pleasant as I shared the drive with a colleague in a Porsche Cayman. We arrived at the circuit by noon, just in time for the day’s opening session with Fernando Alonso.

The Alpine driver was running late for his media duties after being caught in traffic. Flashing a smile at as he passed, he quipped “What are you all waiting for?”

After Hamilton’s regular session open to all written media, I was led up the stairs to the top tier of the Mercedes motorhome with three other journalists. Hamilton was leaning on the bar worktop, casually chatting with his team mate George Russell, as the sliding doors parted and we entered. 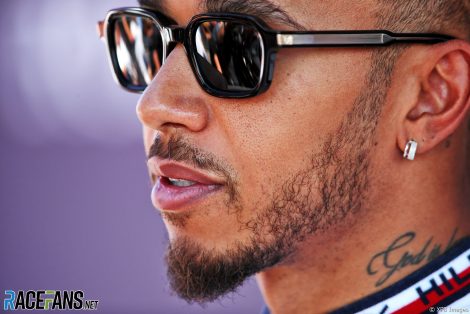 Sitting down in front of us, the seven-time world champion nonchalantly bit into an apple, then started chewing on our questions. As always of late, he was open and candid with his answers to me, though I did notice his leg jiggling under the table as the clock ticked down 30 minutes.

As we were wrapping up, I spotted Alonso climbing the stairs, a grin on his face. I realised he must have been there to apologise for last week’s ‘idiot’ comment on his radio.

Craning his neck around to see what we had spotted, Hamilton smiled and spun back round giving us a knowing look. “I’m here for my hat” Alonso told him, a nod to a social media posts from Hamilton earlier in the week, as we were ushered away.

Next was my chat with Verstappen. The reigning champion looked relaxed as he sat down ahead of his home grand prix. I haven’t had much time with Verstappen on a one-on-one basis, so it was nice to get some face time with the man who in the space of a year and a half has transformed from ‘rising star’ to ‘the man to beat’.

Smiling as he casually strode in, sat down and removed his sunglasses, I noticed how intensely he listened in the relative quiet of Red Bull’s vast motorhome. Giving little away, as usual, I did notice a change in tone when we changed subjects and discussed about his mother, when a wide smile broke across his face.

After wrapping up the day’s regular business I headed home. Despite those around the track knowing nothing about the shuttle service which had been laid on for the media, I managed to find one and get back to the hotel in time for some food. 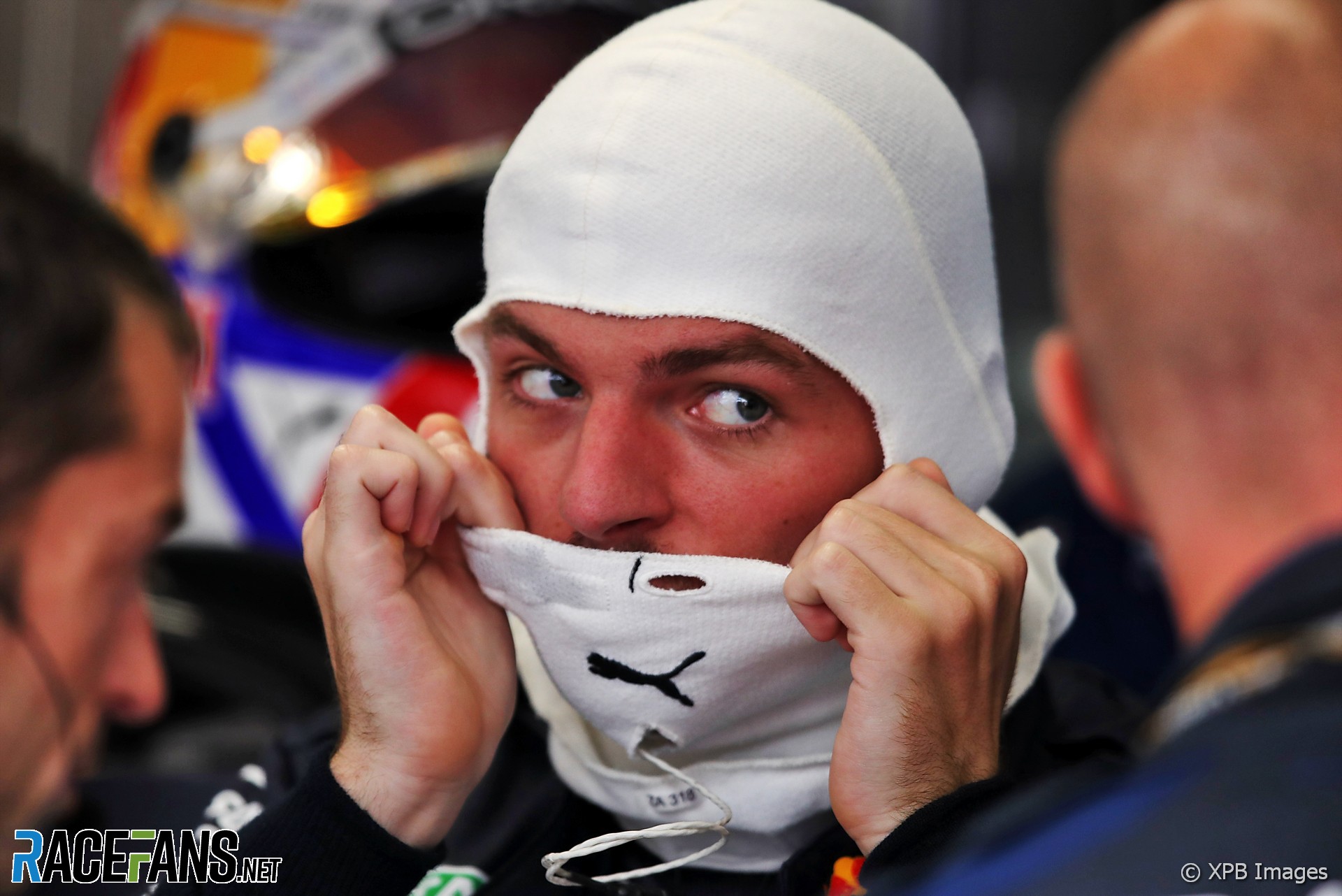 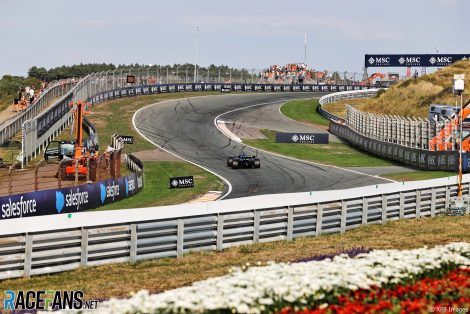 I was aware there were three media shuttles scheduled for the morning, 6:30 am, 8:30 am and 10:30 and two in the evening at 19:00 and 21:00. If the shuttle was full, you would be forced to wait two hours for the next one. Far from ideal with our schedules, I opted for the 8:30, the earliest I could usefully be in the paddock.

Fans had already descended on the circuit and the sea of orange was a challenge to fight through. Children were wearing free Verstappen cloaks which were being handed out by the circuit, showing a huge lion’s face on the back. I collected one for my niece back home knowing she’d appreciate the print.

Rumbles started in the paddock regarding a decision on the Oscar Piastri fiasco and that it would soon be announced. Alpine had been fighting hard to keep their reserve driver as lengthy proceedings had taken place in the court after he signed for McLaren. Moments later the news dropped, which sparked furious typing in the media centre.

I walked up to the commentary box for practice, which has a unique, panoramic view of the circuit, including the steep banking at the final corner.

Later I walked back into the motorhome paddock (which in Zandvoort is split into two) the music started blaring from around the circuit. The party vibe was definitely one to remember, and the Dutch fans certainly know how to bring the atmosphere. 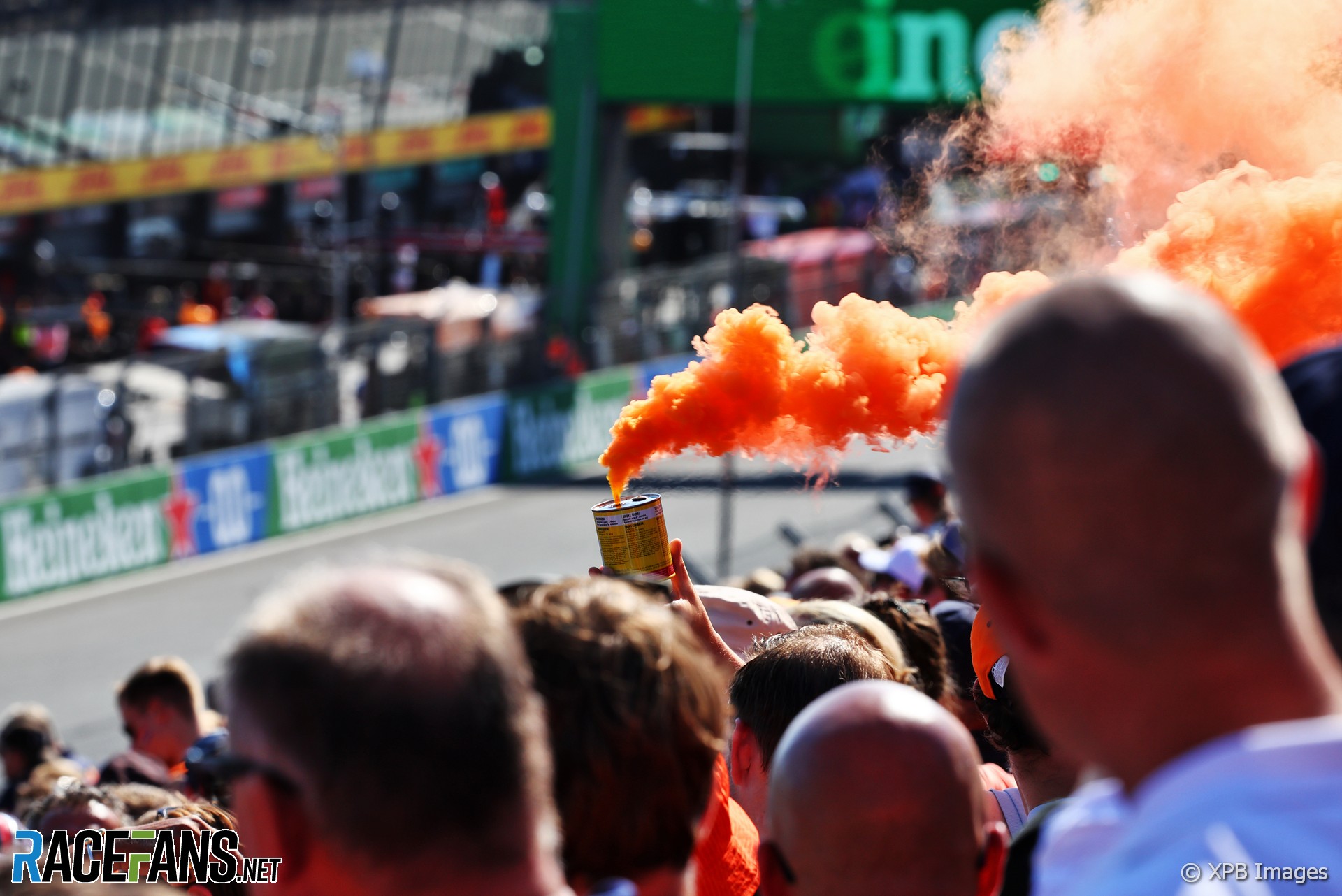 Though the organisation was somewhat chaotic, the shuttles had at least proved reliable for timings, and got me home in 30 minutes the night before. But after being promised an extra shuttle at 8am to make sure we arrived at the circuit in good time for the press conference, we were met with disappointment as no transportation arrived outside the hotel, meaning we had a mad dash to the paddock. 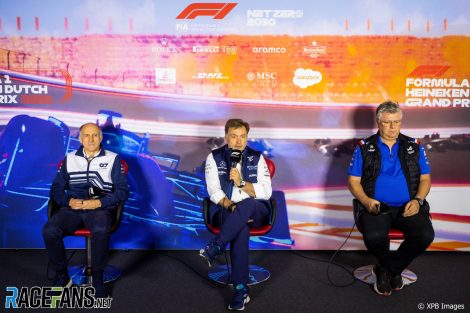 This finally provoked complaints, and we were met by some of the promoters at the track and escorted through the crowds to some buggies. These proved pointless due to the hoards of crowds, so I opted to walk, and arrived just in time for the press conference. This featured both Alpine and McLaren representatives ready to face questions about Oscar Piastri, so it was one I was anxious not to miss.

The music was once again blaring ahead of qualifying as the party continued. The grandstands looked as if tickets were only available to those wearing orange. There was some concern after a pair of orange flare was thrown onto the track during qualifying, however, I noticed a mostly family atmosphere in Zandvoort, with the vast majority enjoying their time sensibly.

Already making my way down to the mix zone to interview the drivers, you didn’t even need to look at the screens to know who had taken pole position. Verstappen denied Charles Leclerc by two hundredths of a second, and place went crazy again. The pounding music only halted during sessions.

Before leaving the track I stopped to speak to David Coulthard – the 13-time grand prix winner a former colleague from my W Series days – who was mobbed by fans seeking selfies. 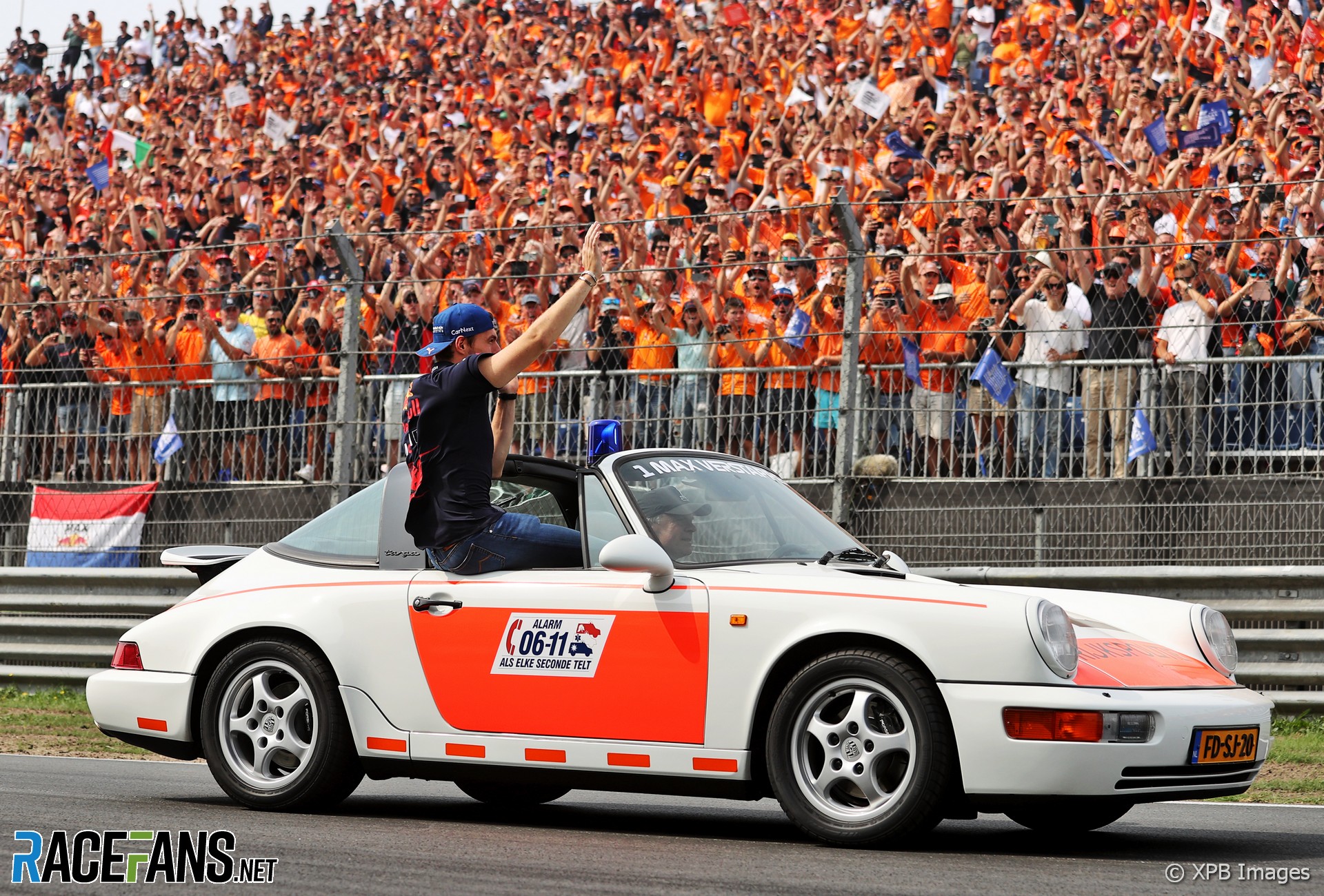 The atmosphere became electric on race day. With the familiar journey into the track and past the beach out of the way, the pounding dance beats were back to full volume as fans streamed into the circuit. It seemed support was even surpassing that of Lewis Hamilton at Silverstone. 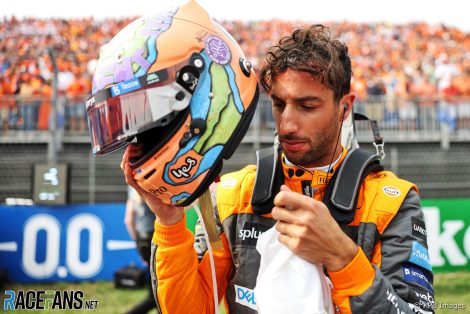 This was a particularly special grid to be on. While the track filled with cars, the stands close by were packed with thousands of fans dancing energetically to the music.

I spent some time just breathing it in. The scene was like something I had never experienced before. I briefly saw McLaren team principal Andreas Seidl and we tried in vain to exchange words over the cacophony. He agreed it was “absolutely bonkers” and I left him to it.

The cars began to filter past me and slot into place as someone turned the music up to 11. The roar from the fans as Verstappen arrived will stay with me for a lifetime. For a brief moment I stopped and remembered the pandemic, which temporarily made this kind of event impossible, which grounded me around the noise.

After the race, and the usual parade of drivers who finished outside the podium places passed by, two drivers arrived later than others, Daniel Ricciardo and Lewis Hamilton. 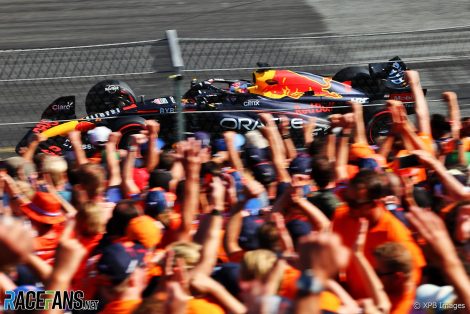 Ricciardo was the first to appear, a huge smile on his face despite finishing second-to-last, 10 places behind his team mate. Then came an extremely chilled Hamilton, who had clearly begun digesting the disappointment of slipping to fourth having been in the hunt for victory.

Seldom one to break eye contact, he explained what had happened during the race. I briefly thought back to our exclusive earlier in the week and realised how long ago that felt.

Zandvoort began with a blast and ended the same way, the packed crowd celebrating another home win. In its second year back on the calendar, it may still have a few problems to sort out, but the atmosphere was nothing short of spectacular.