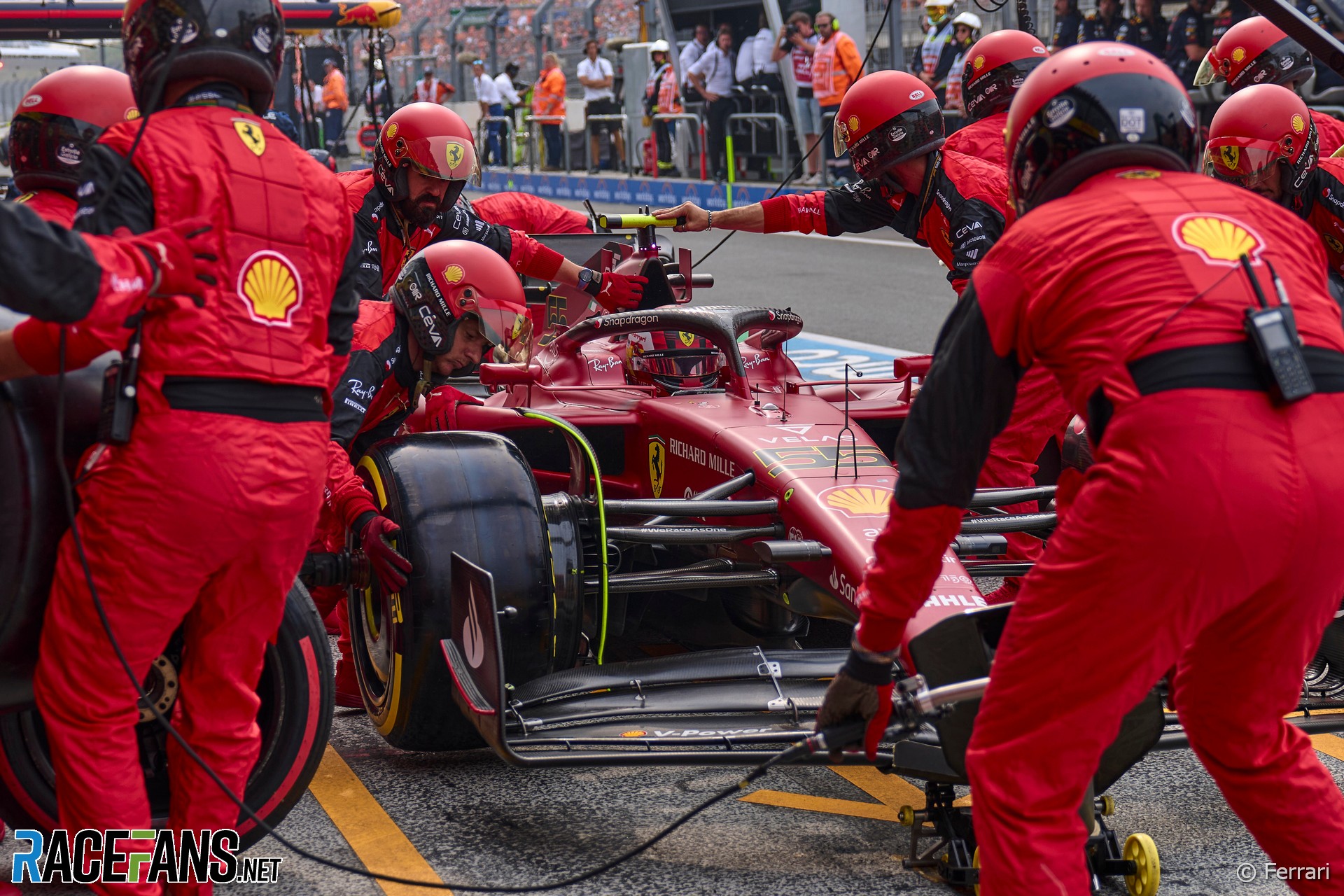 Sainz pitted during the Safety Car period from sixth to switch from hard tyres to softs for the final stint of the race. He was released in front of Fernando Alonso Alpine, who was following the train of cars through the pit lane as instructed by race director Eduardo Freitas.

Alonso took avoiding action and almost came to a stop behind the Ferrari. The stewards later investigated the incident and handed the Ferrari driver a five-second time penalty for it, which dropped him from fifth on the track to eighth in the final classification.

Binotto says he disagreed with the stewards’ decision due to the fact that the very short pit lane had forced him to drive around Lando Norris’s McLaren ahead, who was also pitting.

“The five second penalty cost quite a lot to Carlos,” said Binotto. “Honestly, I feel that the decision of the FIA, of the stewards, has been very, very harsh.

“The reason is when he came in, [the] McLaren was passing through and we [held] Carlos in the pit position because we knew it would have be unsafe to release at the time. We waited to have the right space and we believe that the space was there with the Alpine coming, so that’s why we released him.

“What happened after is that he has to slow down almost to stop, because the pit crew of McLaren was going around the car and in order to be safe with the mechanics he almost stopped – having as well an anti-stall coming in, losing him time, and then it was [too] late.

“But the release itself was not unsafe. The release was safe, the way that Carlos acted was safe, that’s why it seems that the overall decision was harsh.”

After reviewing video of the incident the stewards ruled “car 55 [Sainz] was released from the pit stop position into the path of [Alonso] who had to take evasive action to avoid a collision.”

Sainz, who saw a replay of the incident while behind the Safety Car on a large spectator screen on the exit of turn 10, remained adamant that his team had not been guilty of an unsafe release and that he had actually avoided a dangerous situation with his driving.

“I saw it in the car,” said Sainz. “By the time they released me, it was clearly safe with Fernando.

“But then I had to hit the brakes to not hit a McLaren mechanic that ran into my exit line and it was this braking that generated the unsafe release, if you can call it ‘unsafe’.

“I was clearly frustrated by it, because I thought I had saved someone’s life and not generated a dangerous situation.”

Speaking on his radio during the race, Sainz suggested Alonso intentionally exaggerated how severely he had to slow down. “It was not unsafe, I just saw on the cameras it’s not unsafe,” he told his team.

“The other car exaggerated the braking. He saw more exiting clearly. I’ve seen it on the cameras. If they give me a penalty for that it’s totally fake.”