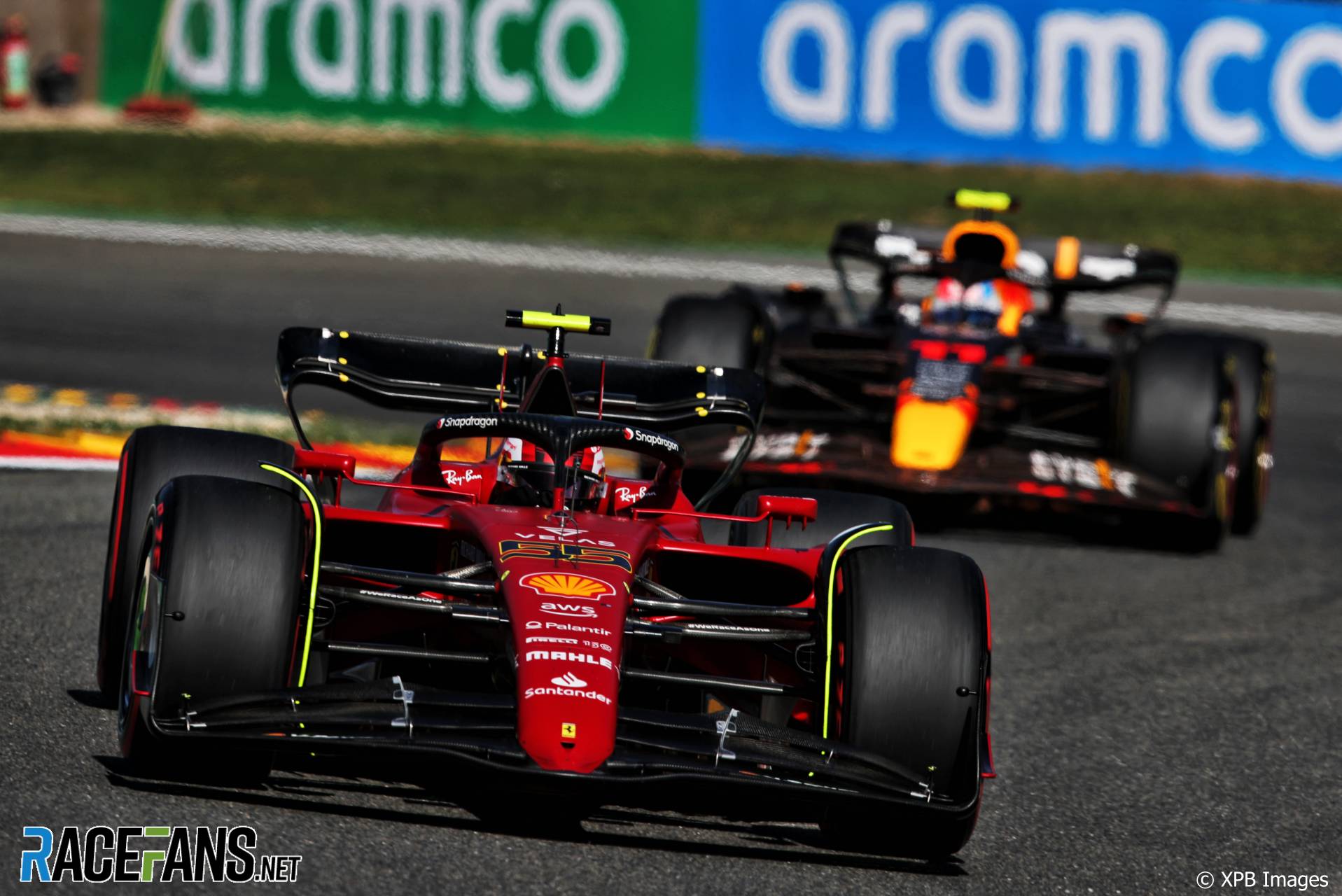 Ferrari say championship rivals Red Bull were “on another level” of performance at Spa, and are concerned it could be the shape of things to come.

Max Verstappen won with ease despite being relegated to 14th on the grid by a series of power unit component penalties. He finished 26 seconds ahead of the closest Ferrari, driven by Carlos Sainz Jnr, who started from pole position but also fell behind the other Red Bull of Sergio Perez during the race.

Ferrari’s Charles Leclerc, who also took grid penalties and finished sixth, said it had been “a very difficult weekend” for the team. He believes Red Bull have made a significant step forwards.

“If you look at Red Bull, they were on another level,” he told media including RaceFans at Spa-Francorchamps. “They found something this weekend. That is a bit worrying for us because for now we don’t exactly understand.

“They are still extremely quick in the straights, it looks like they have no downforce, and then they get into the corner and they are as quick as us or quicker. So it’s a bit worrying.”

Leclerc has fallen 98 points behind Verstappen in the points standings and admits his championship hopes are as good as over. “It is definitely looking extremely difficult now, especially after the pace they’ve shown today,” he said.

He is hoping this weekend’s race at Zandvoort, which demands higher downforce levels than Spa, will be more positive for Ferrari.

“I can’t wait to get there and to get back into the car and hopefully see some progress,” he said. “But before thinking about progress, we need to understand where it’s coming from.

“For now, it’s a it’s a big question mark because if you look at the midfield also the gap is more or less the same as it’s been for the first part of the season. Just Red Bull is so much quicker than everybody. So it’s strange.

Although many predicted the Spa circuit to suit Red Bull, their performance advantage exceeded expectations. Ferrari team principal Mattia Binotto is doubtful that the margin their rivals enjoyed was largely track-specific.

“I don’t think that there is any hope in that,” he said. “I think that has been a true difference between us and the Red Bulls this weekend.

“If I look back, I think they have been slightly faster as well in Hungary, which is a different type of track, high downforce. So overall, I think that simply today the Red Bull is a faster car compared to what we’ve got in terms of overall efficiency because Spa is where you need efficiency both from the aerodynamics and the power unit.”

Red Bull also enjoy superior tyre performance, said Binotto. “We have as well today a lot of tyre degradation that we need to look into and they have been stronger as well in terms of tyre degradation. So I don’t think it has been an outlier.”

Binotto hopes last weekend’s race at least proves to be the peak of Red Bull’s superiority. “They are faster [compared] to us,” he said. “What I’m hoping, certainly, the gap we have seen today, is not the gap we will have in the next races.

“First, I think that Spa is always amplifying the gaps because it’s a long track and whenever you’ve got a slight advantage on efficiency, normally, it’s amplified and very obviously in such a circuit. So yes, we hope to be back in the next races to be closer while I still believe that they’ve got today a slightly faster car.

“But tyre degradation has been, I think, the most as well element affecting the performance of today, which we need to understand and try to address as soon as possible because it will be important as well for the next races.”

Binotto said the new technical directive introduced this weekend to reduce porpoising is not the cause of the swing in performance between the top two teams.

“That’s certainly not the case because I don’t know what the way it has affected the other teams but in terms of Ferrari it has affected in a completely negligible way,” he said. “So it’s not there, the answer.”

RaceFans is run thanks in part to the generous support of its readers. By contributing £1 per month or £12 per year (or the ame in whichever currency you use) you can help cover the costs of creating, hosting and developing RaceFans today and in the future.

35 comments on ““They were on another level”: Ferrari worried by Red Bull’s “strange” leap forward”