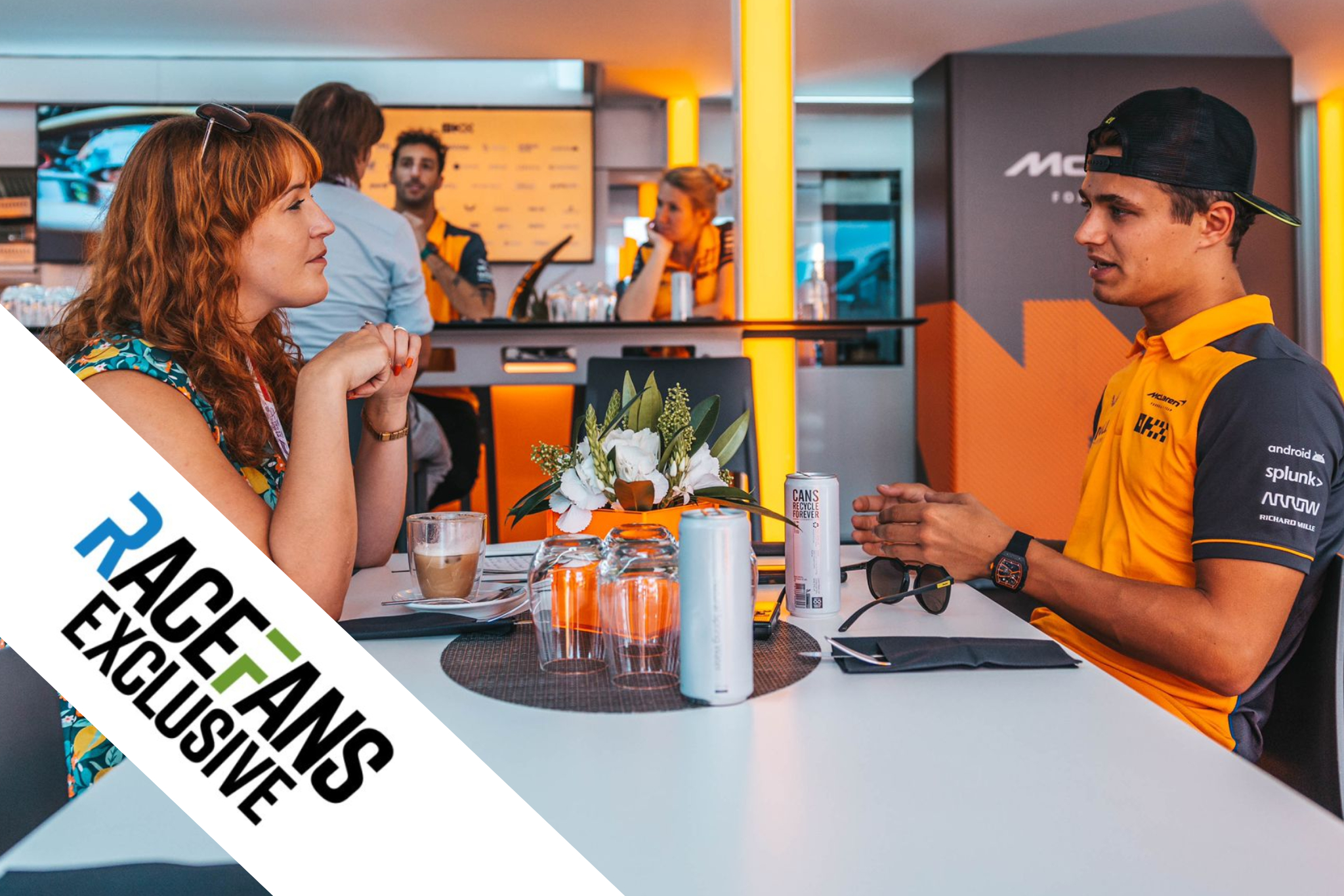 There are two very different sides to Lando Norris.

As one of Formula 1’s current golden generation of exceptionally talented young drivers, Norris’s laddish charm and his witty yet wholesome personality have won him almost as many fans as his exciting exploits behind the wheel have over his three-and-a-half years in the sport.

While the 22-year-old is one of Formula 1’s most recognisable and colourful characters, spend any considerable time in his presence and you’ll quickly discover he is just as much brains as he is banter.

Norris doesn’t care to conceal or mask his emotions. He’s deeply introspective. He can be so self-critical at times that it feels like he’s reluctant to give himself credit after what may seem like a good day out on track.

So when Norris stepped into the McLaren motorhome on a sweltering hot Hungarian Thursday to speak exclusively with RaceFans, both sides of his personality were on full display. Rocking his team hat backwards as he sat back into his chair, flashing his trademark cheeky grin, Norris carries himself with all the confidence of a young man whose long-term future in Formula 1 is assured. And with that comes the freedom to be frank in his assessment of McLaren’s performance this season.

“I guess, growing up, I was luckily always used to winning races and fighting for championships,” he explains. “You get to Formula 1 and it’s the opposite. You have to learn how not to win, almost.”

McLaren are fifth in the constructors’ championship behind Alpine – but it’s almost entirely thanks to Norris that they’re even fighting them at all. After taking third place together in 2020, Ferrari’s resurgence in 2021 meant McLaren fell back to fourth. With radical rules changes this season, there were hopes McLaren could take advantage and become more regular podium attendees. But when they rocked up at Bahrain at the start of the year with a major braking problem, it quickly became clear it would not be that kind of season.

“This year, we obviously got our hopes up,” Norris admits.

“Like, we’ve been on a good progression rate – the team’s in a very good position with personnel and people and we under-delivered on what we needed. So we started the year in a much trickier position than what we should have done. Therefore we’ve then been playing catch up – a big catch up, rather than little bits.”

But it isn’t just McLaren who have fallen further behind the front of the field. The top three teams hold exclusivity over the top three finishing positions – with Norris being the only driver of any of the seven other teams to have broken through onto a podium in 2022. Was he expecting McLaren would have more opportunities to get among the battle at the front with the rules revolution?

“You would hope so, but it’s just people have still done very different jobs in coming up with their own ideas and there’s a big performance difference still,” he says. “Which I wouldn’t say is the whole point of this car – the main point is so we can just race and follow closer.

“You don’t want to just ‘fix’ it, so people can only do ‘this amount’ – I don’t think that’s Formula 1 then. Give it a couple of years and I think it will even out and people will all come closer together and figure out how to maximise this car. Like what we had last year – it was the closest year of Formula 1 in so many years and the racing was good. Now we have a better car for racing, it’s just the first year of a new era and sometimes it just takes a couple of years for things to tighten back up a bit.”

As Norris talks openly about his sport – his many bracelets dancing on his wrist as he gesticulates – his team mate Daniel Ricciardo is behind the motorhome bar casually chatting away with McLaren’s director of communications. Norris’s older stablemate may have been thoroughly unable to match him during their 35 races together, but Ricciardo does possess one thing that Norris desperately desires: A grand prix victory for McLaren.

He’s been agonisingly close, though. As well as pursuing his team mate home in Monza last year to secure a historic one-two for the team that has nurtured him for so long, he so nearly followed that up with his maiden win in Sochi the very next race weekend. He took pole and led 30 laps before losing the win by leaving it too late to switch to wet tyres.

Over 1,500 days since Norris’ last competitive race victory – the opening feature race of the 2018 Formula 2 season in Bahrain – what did he learn from coming oh-so-close to his first grand prix win?

“I mean, the pressure of leading a race,” he smiles. “It’s been a while!

“Of course I thought of it, but at the time it wasn’t like ‘I have so much pressure because I’m fighting for a win, how do I keep them behind?’, and making mistakes because of that. That wasn’t the case. I think I did well in just handling the position I was in. It’s just making the decisions that I had to make with tyres while leading a race is a tricky situation.

“There’s been plenty of times when Mercedes or Ferrari or Red Bull have been in a position and they’ve made mistakes. Charles [Leclerc]; leading a race, fighting for a championship – I wasn’t even fighting for a championship. Everyone expects us to never make mistakes, but everyone does – drivers included. It can be tough at times, but I think it definitely helped me and help the team be in a better position for when hopefully we’re in that position again.”

McLaren may be enamoured with so many drivers at present given the volume of talent on their books or the countless others they are actively pursuing, but Norris is clearly the one who owns McLaren’s heart. That multi-million pound extension was proof of that. But Norris signed that extension not to score minor points and the odd podium – he signed it to win races.

Is he worried at all about his chances of achieving that, given that McLaren have fallen further behind their rivals ahead of them this season?

“No, no, no, no. I still believe,” he replies without hesitation.

“I didn’t sign up to be with McLaren for this year like ‘this year I’m going to be winning races’ – that was far from my belief. I still knew it would take a good few years – 2024-25 will be the first time when there should be less and less excuses in a way to go ‘why aren’t we in a position we should be in?’.

“I think still for a couple of years, things are still in progress. The wind tunnel and the simulator – all these little things the top teams have optimised for many years and we’re just a long way behind with all of this stuff. To be one of the winning teams, every single area needs to be operating in the perfect window, at a very professional level. Over the last few years, there was too many things for us which weren’t at that level that we needed to be at. There are some things which we are much closer to, but still just needs a little bit more time.

“I guess I’m frustrated at times, for sure. I guess it was very frustrating at the beginning of the year, but when you have like a podium or something, there’s still hope, you know? But I know I’m not here this year to win races – I’m here in two or three years to win races.”

Norris knows that not only does McLaren still need to evolve to get to a point where they are winning races again, but he also must continue to develop as a driver. Not that he needs anyone to tell him that – he’s quite happy to admit he’s becoming more demanding of his team in the garage.

“I feel like now when I’m demanding, it’s because I just have a bit more of a feeling, like ‘this is what I need from my car, this what I want, this will make me go quicker’,” he explains.

“I think when you’re in your first year, you’re a bit more wary of ‘will it make me go quick? Maybe I’m wrong?’ and you just never want to be wrong, so you always just agree with the team when you say yes and whatever. But now, for good reasons, I will have different opinions and I’ll raise my opinion and we talk about it. We come up with a better result. I think a lot of things just come up with better results in the end.”

That determination can be heard in Norris’s radio traffic out on the track too. While he gets on extremely well with race engineer Will Joseph, Norris is not afraid to voice his displeasure or frustration when he’s unhappy with how his race is going.

“When I’m in the car it’s just because my heart rate is going. I feel like I’m just saying something, but then it sounds very different to what I expected. Even when I feel completely chilled. It’s very easy to just interpret things differently to what they actually are, if you’re not in the situation.”

As one of the most prominent drivers on the grid who regularly puts himself out to the world on Twitch and his own media venture Quadrant, Norris is used to being talked about. He says he’s already learned so much about how to deal with being under the spotlight of public scrutiny.

“People have different opinions on what someone says or how they say it and all this stuff,” he says. “You also get used to people having the wrong opinion. And by ‘wrong opinion’, I mean that you know that one thing is like so and they’re convinced it’s another reason or there’s another excuse when there just never is. So their opinion is completely invalid.

“When they start to believe that and share that, that’s when you get frustrated, because a lot of people here have a platform to use so when they start to spread something, that’s when it frustrates you a little bit because just like, ‘you have no idea what you’re talking about. Stop thinking you do when you don’t’. It’s also Formula 1 again. It’s what you have to get used to a little bit.”

Over three years into his career in Formula 1 at the age of just 22, there’s still so much that lies ahead in the future for Lando Norris. But whatever happens for McLaren for the rest of this season, he is convinced that his team will only get a better driver out of him as they continue to strive for their shared goals for success.

“I definitely feel I’m a lot more complete and a more reliable and valuable driver than what I was last year or even two years or three years ago.

“I think there’s still plenty of time to do things better and improve.”

5 comments on “Exclusive: Lando Norris on working to win with McLaren in 2024”