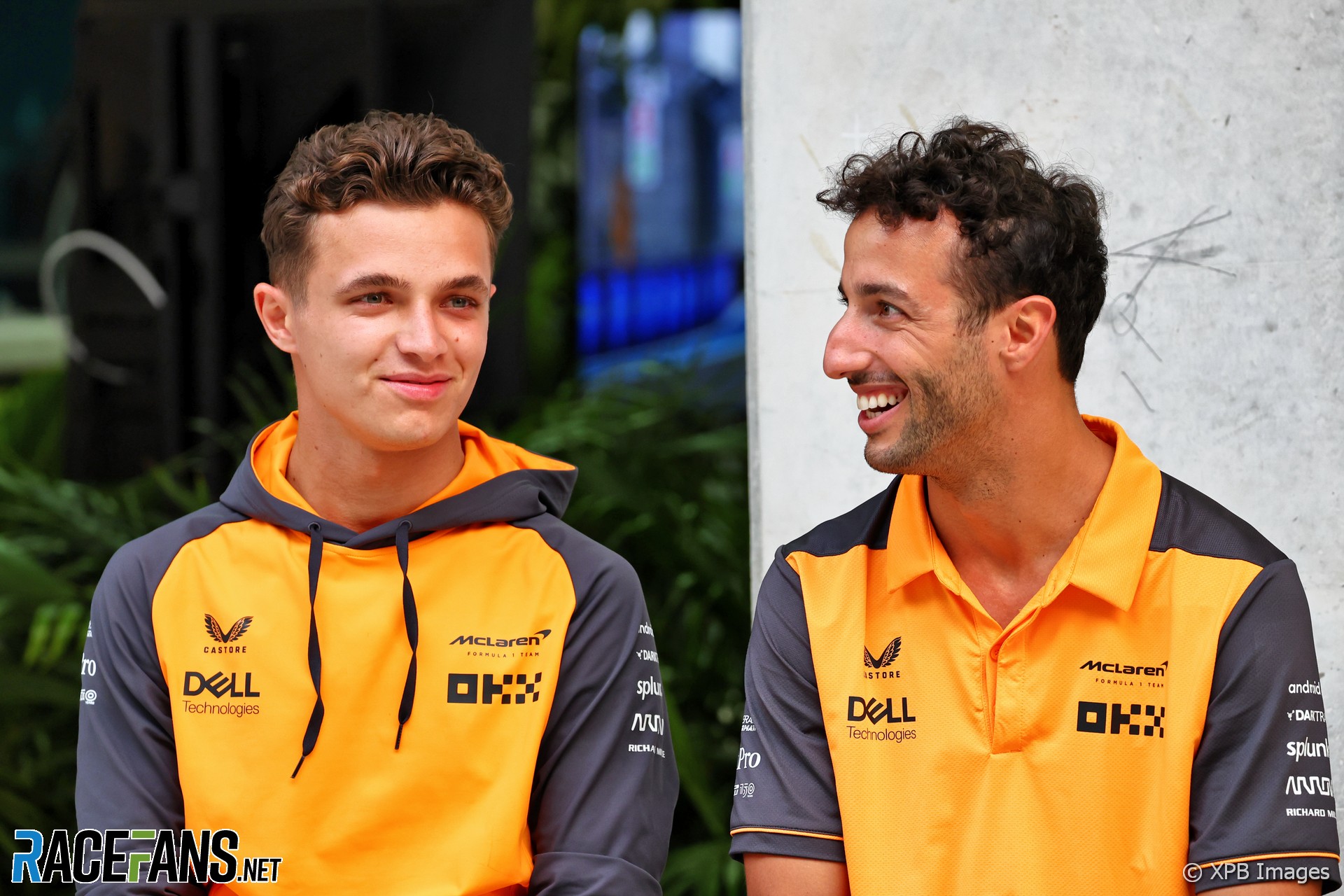 In the round-up: Lando Norris is helping his struggling team mate in McLaren’s drive to beat Alpine.

No McLaren mind games while Alpine battle hots up

Past the halfway point in his second season at the team, Ricciardo is yet to find his form. Norris, who has signed two new deals with McLaren since his latest team mate arrived, made it clear he isn’t trying to turn the psychological screw on Ricciardo.

“No, it’s the opposite,” he said when asked by RaceFans at the Hungaroring. “I’m trying to help him as much as I can.

“It’s for the benefit of us as a team to try and beat Alpine, in the end of the day. He sees everything that I see in terms of data and everything.

“I’m offering more help than what I normally would. If you were fighting for a world championship, I’m saying more things that maybe what I would do. Just because that’s what we need for the team, it’s what I want for the team at the minute. So no [it’s] the opposite of mind games, whatever that is. ‘Mind soothing’.”

Super Formula reveals 2023 calendar, but not length of season

Super Formula, Japan’s top open-wheel racing series, has revealed which circuits it will be racing at next year but not how many races it 2023 season will consist of.

It is practically identical to the 2022 calendar, with the first race weekend taking place at Fuji Speedway on 7th-9th April. The first trip to Suzuka, the current home of the Japanese Grand Prix, is two weeks later and Autopolis is visited on 19th-21st May.

During summer Super Formula races at Sportsland Sugo (16th-18th June), Fuji (14th-16th July) and Twin Ring Motegi (18th-20th August), then there is break of two months before the season concludes at Suzuka on 27th-29th October.

This year the season opener, finale and Motegi round consist of two races while the weekends inbetween are single-race events. The 2023 calendar reveal did not mention if any events will feature two races next year.

'Multiple sources have revealed the West Aussie’s initial asking price is $21 million, though that is expected to be reduced as the team haggles over price. It’s likely also that, should Ricciardo secure a drive elsewhere next season, any salary component he receives would see the same value refunded to McLaren.'

''So I sat in the car park for two hours,' Leclerc remembers, 'trying to guess what it was like inside. I imagined Charlie and the Chocolate Factory, y’know? With Oompa Loompas running around.''

'Michelin’s Pilot Sport EV tyres reached their third generation inside eight seasons of FE competition, having been the tyre of choice since the very first race in 2014. They’re the only 18-inch tyre to feature in a single-seater FIA world championship and the only one that’s engineered to perform in both wet and dry conditions.'

'It is often said that Scott Dixon does 'Scott Dixon things'. Sunday was another example of that.'

Tech Tuesday: Assessing the strengths and weaknesses of every car on the 2022 F1 grid (F1)

'We've had 13 rounds of exciting racing with this new era of F1 hardware, but what are the strengths and weaknesses of each team's cars? F1 technical expert Mark Hughes weighs up the pros and cons of all 10 cars on the 2022 grid.'

'Stefano Domenicali's team is grappling with an equation with too many unknowns to respond to requests from the teams, who nevertheless need quick answers.'

If we reach 50,000 YouTube Subscribers, the LIVE Stream for #SUPERFORMULA Rd.7 will be FREE🙌

Who's leading the 2022 F1 Drivers Championship (of social media engagement)?

None other than the affable @danielricciardo.

Using the F1 points system, we used engagement race data per race to determine the top 10.

Notably popular is Sebastian Vettel, even without social. #F1 pic.twitter.com/H1odjMVBby

On Sunday, GTA chairman Masaaki Bandoh unveiled the 2nd generation #F4jp car for the 2024 season. The Halo-equipped car is developed by Toray Carbon Magic. TOM's and Dunlop remain the engine and tyre suppliers. The engine output will be increasd from 160hp to 180hp. #SUPERGT pic.twitter.com/a7VtEXIJE5

There’s excitement about Ricciardo’s planned television series, that will focus on F1 and which he intends to bring more attention to the series. It will be a scripted fictional production rather than a documentary show though, with comedic influences, which could have unintended consequences.

Lets be honest, it’s sounds horrendous and it very obviously isn’t being made for F1 fans (who have been actively advocating against artificial drama).

The problem is, if it paints an unrealistic picture of the sport and viewers watch a GP weekend and end up bored or unimpressed, it could do more harm than good…
Luke S

Get the best of our motorsport coverage after every F1 race in your inbox – sign up for the free RaceFans email Newsletter: