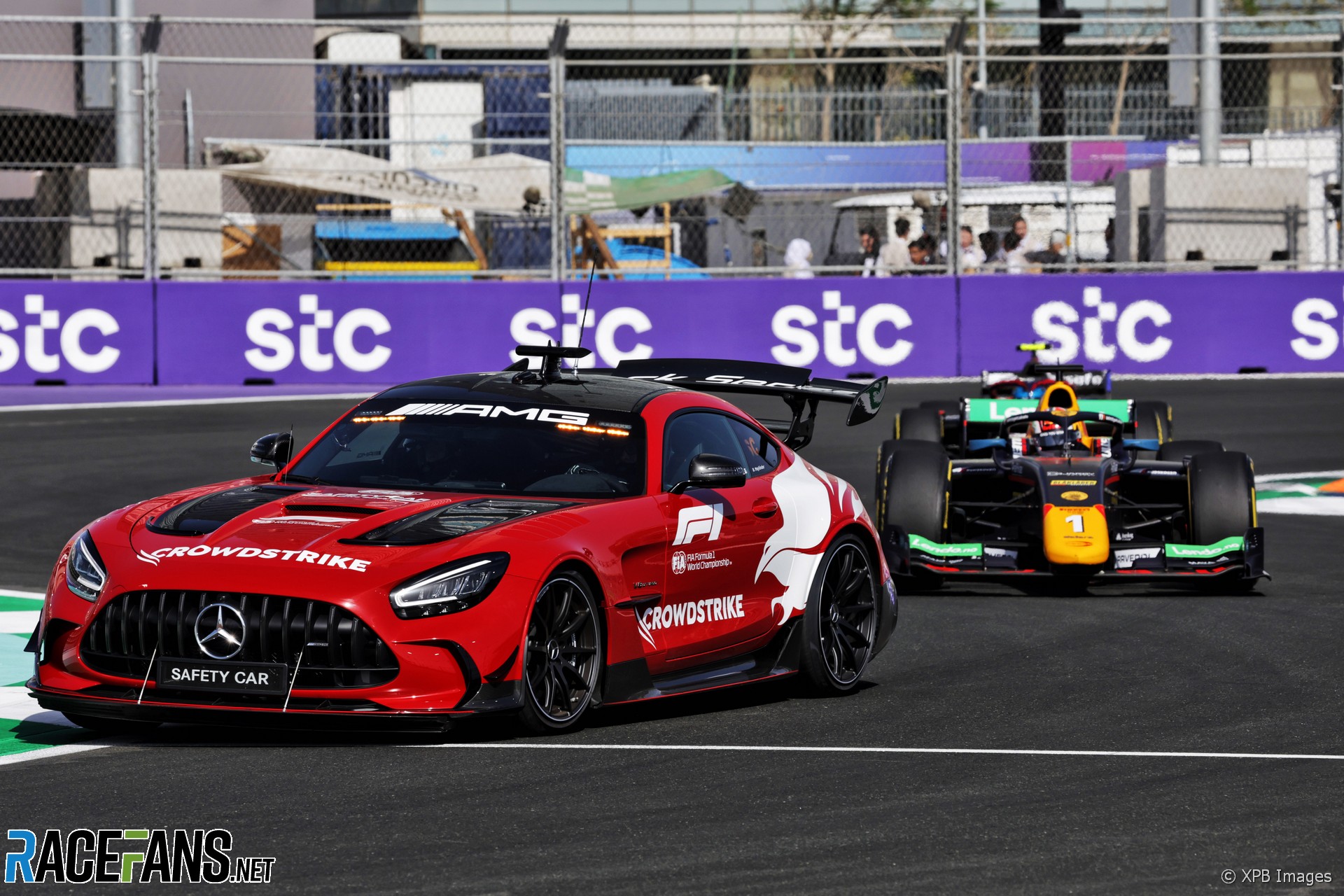 Liam Lawson won the Formula 2 sprint race in Saudi Arabia, after a mix up under Safety Car cost Dennis Hauger the lead of the race.

More than half the laps were conducted behind the Safety Car, with Lawson taking the lead from Calan Williams after previous leader Hauger mistakenly drove through the pitlane under Safety Car conditions having been told by his team to do so.

Before the lights went out, Hauger had been set to start from the partially-reversed-grid pole, with Jake Hughes having been adjusted to second after other drivers’ penalties had been applied. Behind them, Calan Williams and Ayumu Iwasa lined up on the second row.

Hauger got an excellent start, followed by Williams, while Jake Hughes fell down the order, being pipped to third by Ayumu Iwasa by turn two. Hughes, however, was able to fight back and reclaimed the place going around the inside of turn 27, before the end of lap one.

A Safety Car was called on lap two, when Amaury Cordeel struck the barrier on the exit of turn 12 – his car stricken and wheels splayed in a way that made it look unlikely to be easily rolled away. Cordeel got out of his car and followed a marshalling point through the fence, but his jackknifed VAR was sticking out over more than half the width of the track.

The Safety Car came in at the end of lap six and Hauger was clear to lead the restart, with Williams and Hughes behind him. Hauger got away with the lead, before a crash between Logan Sargeant and Jack Doohan exiting the final corner saw the Safety Car called out again, Sargeant’s car stranded in the middle of the track and Doohan’s side-on into the outside barrier. Both drivers climbed out of their car unaided.

Doohan appeared to have begun to accelerate, believing that the race had restarted, only for cars ahead of him to slow down again.

Cars were originally told that they should follow the Safety Car through the pit lane, which Hauger did while leading the pack before catching up to the Safety Car. Drivers were then updated that the pit lane was closed, as Doohan’s car was obstructing the entrance, causing Hauger to drop all the way down to 12th as the rest of the field behind him remained out on the race track.

Retrieving Doohan and Sargeant’s cars proved an extended affair, with two recovery vehicles brought onto the live track. Meanwhile, Hauger was placed under investigation for entering the closed pit lane and his Prema pit wall was forced to inform him on lap 10 that race control would be proceeding with investigating him. On lap 11, Hauger was informed he had a ten-second stop-go penalty, despite, as his team confirmed to him, the “two times we were informed by the race director to go through the pit lane”.

“If we got the confirmation to go through the pit why are we getting a fucking penalty?” demanded Hauger, a lap later. “When [the] safety car goes in, we also come in and serve ten second stop-and-go” he then asked as the car was ending, which the team confirmed was correct.

Calan Williams, having inherited the lead from Hauger, was responsible for the restart, going side-by-side through turns one, two and three with Jake Hughes. The Van Amersfoort driver was able to come out ahead, while Lawson took advantage of Williams slipping back through turns six and seven to take the lead.

Ayumu Iwasa was defending against both Hitech drivers through turn 27 on lap 14, as Jüri Vips sent it up the inside and inadvertently blocking Marcus Armstrong, keeping them both behind. However, Vips recovered down the pit straight and was able to pass Iwasa for fourth place through turn one.

With five laps to go, Hauger – who could have been in the lead but for trying to follow instructions – was last and 25 seconds back from Olli Caldwell, at the back of the pack.

Vips made another pass around the inside of turn 27 on lap 16, snatching third place from Williams. Hughes’ soft tyres had looked like they were starting to drop off, on the hot sunlit track and at the start of lap 18 Lawson was able to breeze past him on the straight and cleanly take the lead of the race with three laps to go.

A yellow flag was flown on lap 19 when Marcus Armstrong spun between turns 16 and 17, after battling side-by-side with Ayumu Iwasa and was unable to keep his car going. Marshals arrived to push his car away but with under a minute of possible race time left, a virtual safety car looked likely to stick to the end.

However, there was a final restart and Lawson – as would be expected, with gaps maintained behind the virtual safety car – made a clean getaway. Lawson crossed the chequered flag with Vips and Hughes drag racing to the line behind him, Vips just winning out to take second place.

Lawson takes the lead of the Formula 2 championship with the sprint race win. Felipe Drugovich will take pole for tomorrow’s feature race.