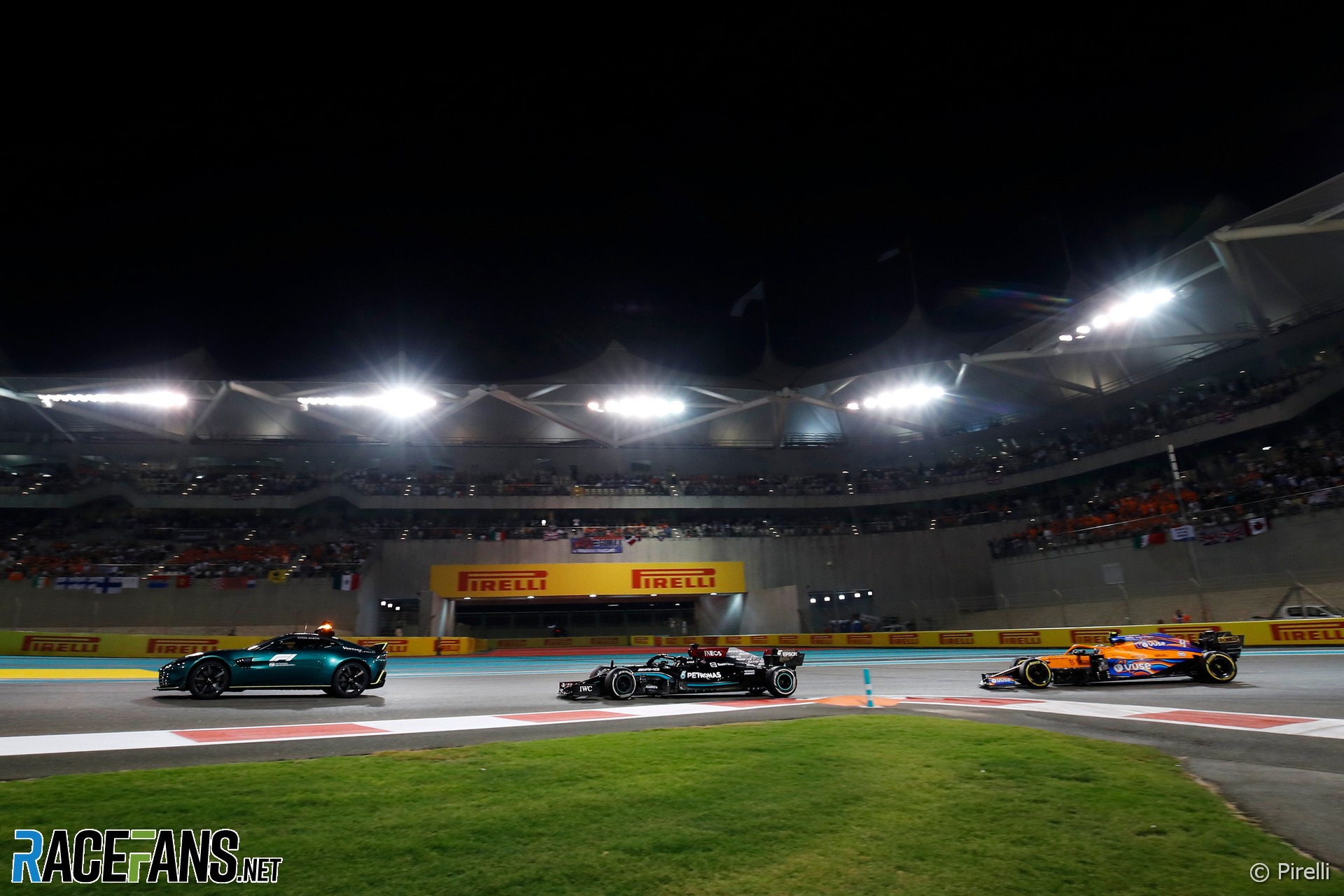 Across a four-minute period late in the Abu Dhabi Grand Prix, FIA Formula 1 race director Michael Masi changed his mind on a decision which ultimately determined which driver won the world championship.

After the Safety Car was deployed in reaction to Nicholas Latifi’s crash, Masi’s handling of the restart was always likely to have a bearing on the title fight between race leader Lewis Hamilton, who was poised to clinch the title, and pursuer Max Verstappen, who needed to pass his rival to win it. Once Verstappen had used the Safety Car period to fit a fresh set of rubber, five lapped cars lay between him and his target.

In Safety Car periods, F1 ordinarily gives drivers the opportunity to un-lap themselves. This is normally done via the digital messaging system.

When drivers did not receive that instruction after the Safety Car period some asked their engineers why. Race control then put out an official communication saying no un-lapping would take place.

But four minutes later that changed. The green light was given to the five lapped cars between Hamilton and Verstappen. As they moved past the Safety Car, Verstappen then only had clear air between himself and his title rival. The other lapped cars behind him were told to keep their position. Verstappen therefore had a clear shot at Hamilton and the lapped Daniel Ricciardo and Lance Stroll separating him from third-placed Carlos Sainz Jnr.

A complicating factor for Masi was the time taken to clear Latifi’s car. Although this was a single-car collision, the operation was complicated by a few minor snags which held up the clear-up while the clock ticked down.

Immediately after Latifi struck the barrier yellow flags were waved at turn 14, with green flags being waved on the short straight to the next corner. The Williams couldn’t be retrieved until the track was under Safety Car conditions.

Once marshals were allowed onto the scene their first job was to clear the debris surrounding the car so others could get through. This ultimately prevented the need for a red flag, and took away one of the options the race director had.

Latifi had gone rear-first into the barriers leaving some carbon components strewn at the exit of the corner, as well as his whole front wing lying nearby. His car was opposite one opening in the barriers, but moving it across the track would have been more time-consuming and would have blocked the way through as well. Instead, a mobile crane vehicle was deployed to pick up Latifi’s car and take it back to the apex of turn 14 where there was another opening.

It took a minute for Latifi to turn off his car – ensuring it was safe for the marshals to touch without the risk of an electric shock (although they came equipped with insulating gloves regardless in case there had been an ERS failure) and to then extract himself and move to a safe place off-track.

He then briefed the nearby marshals of the details of his crash. Meanwhile his front brakes caught fire, giving the corner workers another drama to contend with. The clear-up was delayed once the brakes starting visibly flaming, with several of the marshals without fire protections ushered away and jumping back over the barriers. It took nearly another minute for most of the debris to be picked up.

The first marshal to attend the car with a fire extinguisher did so from a position off-track, with the clouds of spray being produced by the canister reducing visibility around the car.

Another minute went by as they waited for that cloud to disperse, all while smoke was billowing out from the front wheels and keeping a haze around the car. They then had to check on the radio what the gaps were to the next cars reaching the final sector to know what time they had to head back into the middle of the circuit to collect the rest of the debris. A separate group of marshals, accompanied by the mobile crane vehicle, then came over to collect the car.

Four minutes after the crash, the car was finally in the air and ready to be moved away. When Latifi’s crash occurred five laps remained of the race, but the drivers were on their penultimate lap by the time race control’s message that no un-lapping would be allowed had been communicated to all of the drivers and shown on the television screens.

Once Latifi’s car was removed from the track and craned away it remained roped up in the air off-camera for another minute where the crane was parked and so could potentially have remained a concern for race control at this time.

Once that was done, all the marshals in that area of the track were available to attend to any further incidents and could be contacted on their radios without distraction. That freed up the possibility of returning cars to racing speed.

Halfway around the next lap, race control told the five drivers between Hamilton and Verstappen in the Safety Car queue they could un-lap themselves. This departed from convention in several ways.

The standard procedure is for at least a lap to be given for those cars to circulate and return to the rear of Safety Car queue if possible, but the five were given just over a minute to sprint away in non-racing conditions – the race was still being run behind the safety car so they couldn’t pass one another and had to maintain a somewhat reduced pace – before Hamilton led the front of the field away.

As McLaren’s Lando Norris said, bringing Hamilton and Verstappen together on track for a final-lap restart looked like it was made “for TV”. It also ignored the strategic decisions teams had made based on the FIA communicating that no passing would take place.

Norris’ lapped team mate Daniel Ricciardo darted into the pits as Verstappen did behind the Safety Car and lost two positions to Charles Leclerc and Sebastian Vettel, expecting he would have a chance to make them up as soon as they would have to get out of Verstappen’s way with blue flags on the restart lap.

But Masi decided to give those two cars a 70-second head start on Verstappen and Ricciardo. The motivation behind this was to ensure the race concluded with a green flag lap, an outcome Masi later said the teams had previously agreed was “highly desirable”.

Arguably, reversing his earlier decision to let some cars un-lap themselves delayed the resumption of the race because radio communications then had to be made across the circuit to make sure marshals were aware that several cars would be going by at a faster speed while they were still required to show the Safety Car board. The usual advanced notice of a full lap before a restart, rather than seven corners, is for the good of those trackside operators as much as it is the drivers seeking to get back on the lead lap.

Once the FIA announced it would return the race to green flag conditions, it had to do so. And if race control felt the only way to do that and to direct the race to make sure it concluded safely and uniformly was to let five cars un-lap themselves, then it was doing its job correctly, albeit with direct interference in the on-track action that disproportionately impacted drivers in a way never seen before.

Mercedes protested the race result on these grounds, claiming a breach of Article 48.12 of the sporting regulations. The penultimate paragraph of that article begins: “Having overtaken the cars on the lead lap and the Safety Car these cars should then proceed around the track at an appropriate speed, without overtaking, and make every effort to take up position at the back of the line of cars behind the Safety Car.”

The paragraph concludes: “Unless the clerk of the course considers the presence of the Safety Car is still necessary, once the last lapped car has passed the leader the Safety Car will return to the pits at the end of the following lap.”

These rules had previously been interpreted with some contention under Masi’s directorship in 2020 when the Eifel Grand Prix at the Nurburgring had a lengthy Safety Car period that bunched up the field and set up another Hamilton versus Verstappen battle.

“There’s a requirement in the sporting regulations to wave all the lapped cars past,” Masi said at the time when pressed on why five laps of Safety Car running had been needed then to clear a smoking car parked next to a barrier opening. That statement was made after Verstappen said he thought the reasoning behind the Safety Car was “they just wanted to make it more exciting again because of the gaps”.

Red Bull’s representative at the hearing on Mercedes’ Abu Dhabi protest provided the argument that the regulation could be interpreted as not requiring all cars to un-lap themselves. The stewards ultimately rejected Mercedes’ protest but conceded in their explanation that “Article 48.12 may not have been applied fully”.

The result of that appeal therefore suggests that the FIA didn’t stray overtly away from its own rules when making such a controversial decision. But given how unexpected it was – and the fact that the signal that the Safety Car was returning to the pit lane came moments after the five drivers were told they could un-lap themselves – it points more to the rules being far too open for interpretation to a point where to many it looked like the show was prioritised at the expense of sporting integrity.

Race directors always have to think on their feet. Latifi’s car clear-up did provide more challenges than was perhaps obvious to television viewers and even to the Red Bull pit-wall who complained about the length of the Safety Car period. The speed at which the marshals could work both ruled out the need for the last resort of a total stoppage while also leaving insufficient time for lapped cars to be cleared out of the way in line with past practice.

That set up the prospect of the F1 world championship concluding behind Bernd Maylander’s Aston Martin Vantage. Clearly that was considered undesirable, prompting the contentious restart decision.

The stewards’ account of Masi’s evidence in the hearing on Mercedes’ protest said he decided “to remove those lapped cars that would ‘interfere’ in the racing between the leaders.” Whether that decision was consistent with the FIA’s rules and Masi’s previous interpretation of them will no doubt be a focus of Mercedes’ appeal – if they choose to proceed with one.

197 comments on “Analysis: The four minutes that changed the destiny of the 2021 world championship”