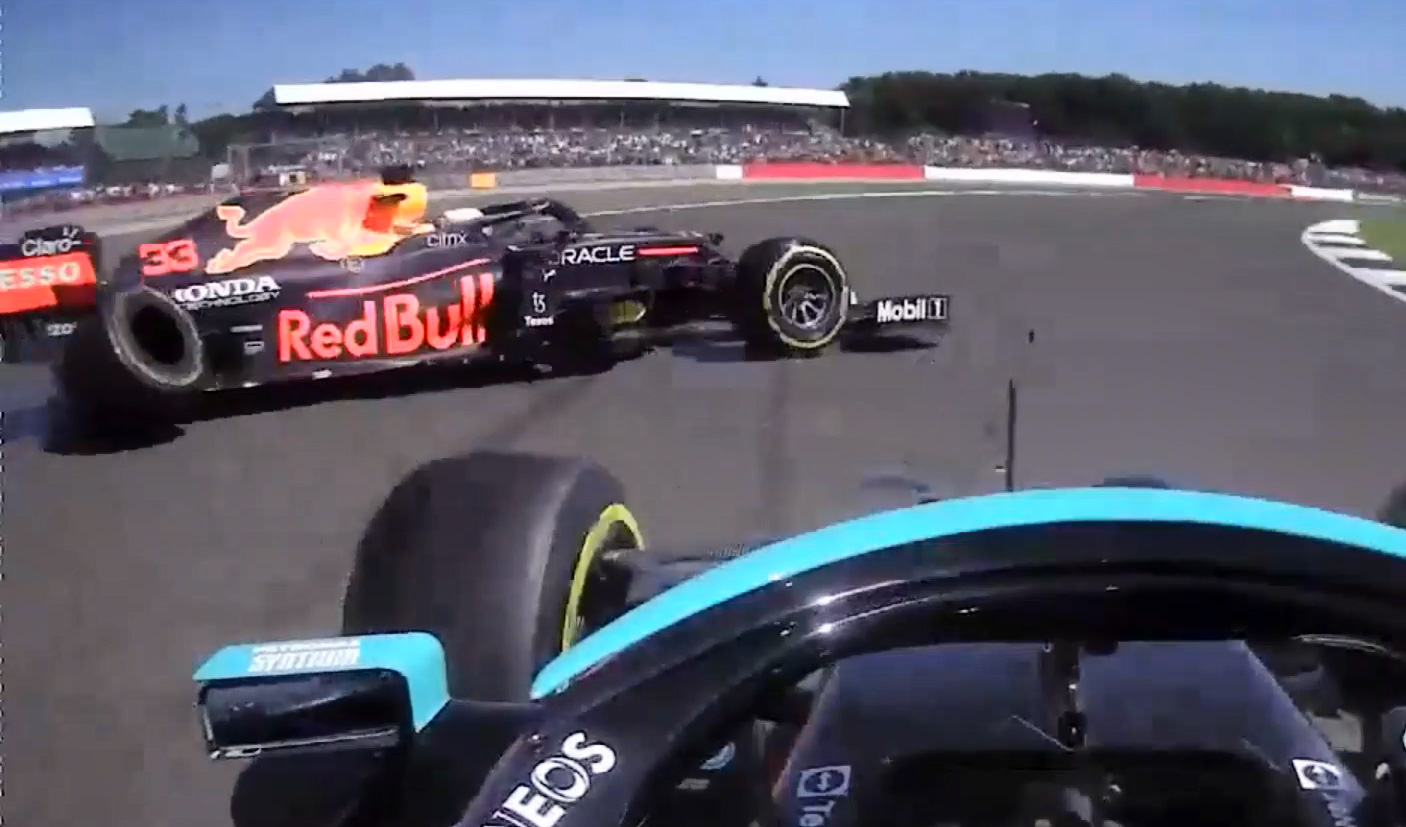 Who was to blame in the race-ending clash between Lewis Hamilton and Max Verstappen in the British Grand Prix?

Verstappen and Hamilton tangled on lap one of the 2021 British Grand Prix at Copse.

The pair started the race on the front row of the grid, Verstappen on pole position. Hamilton made a slightly better start and repeatedly tried to pass Verstappen until the pair made contact going into the ninth corner.

Approaching the scene of the crash, Hamilton came out of Luffield behind Verstappen but gained on him as they passed through Woodcote and pulled out to the inside as they approached Copse. Verstappen came off the racing line to cover the inside of the corner, then moved left and back towards the line as they reached the turning in point. Hamilton was also able to move slightly towards the racing line.

Both turned into the corner, but as they did the pair made contact, Hamilton’s front-left wheel impacting Verstappen’s right-rear. The contact sent the Red Bull spinning into a barrier, while Hamilton was able to continue.

The race was red-flagged while Verstappen’s car was recovered and the barrier he hit repaired. Mercedes used the interruption to perform repairs to Hamilton’s car, without which he would not have been able to continue.

Hamilton described the collision to his race engineer Peter Bonnington on the radio afterwards. “He just turned in on me,” he said. “I was ahead going in there. I was fully alongside, that’s my line.”

Verstappen’s feedback was not heard as his onboard camera stopped broadcasting after the impact.

Hamilton stated he was within his right to attempt to overtake Verstappen and said his rival had failed to leave him sufficient room. “I was fully alongside him and he didn’t leave me any space,” said Hamilton.

Both drivers were investigated over the collision. Hamilton was found to be “predominantly to blame for the incident”. The following regulation was cited as the reason for his penalty:

Causing a collision, repetition of serious mistakes or the appearance of a lack of control over the car (such as leaving the track) will be reported to the stewards and may entail the imposition of penalties up to and including the disqualification of any driver concerned.
International Sporting Code appendix L, chapter four, article 2(d)

The stewards explained why Hamilton was considered to have broken the rule:

Car 44 [Hamilton] was on a line that did not reach the apex of the corner, with room available to the inside. When car 33 turned into the corner, car 44 did not avoid contact and the left front of car 44 contacted the right rear of car 33. Car 44 is judged predominantly at fault.
2021 British Grand Prix stewards document 50

Who do you think was responsible for the collision? Were the stewards correct to issue a penalty? Cast your vote below and have your say in the comments.

Who was to blame for Verstappen and Hamilton's collision at Silverstone?

A RaceFans account is required in order to vote. If you do not have one, register an account here or read more about registering here. When this poll is closed the result will be displayed instead of the voting form.

27 comments on “Who was to blame for Verstappen and Hamilton’s collision at Silverstone?”