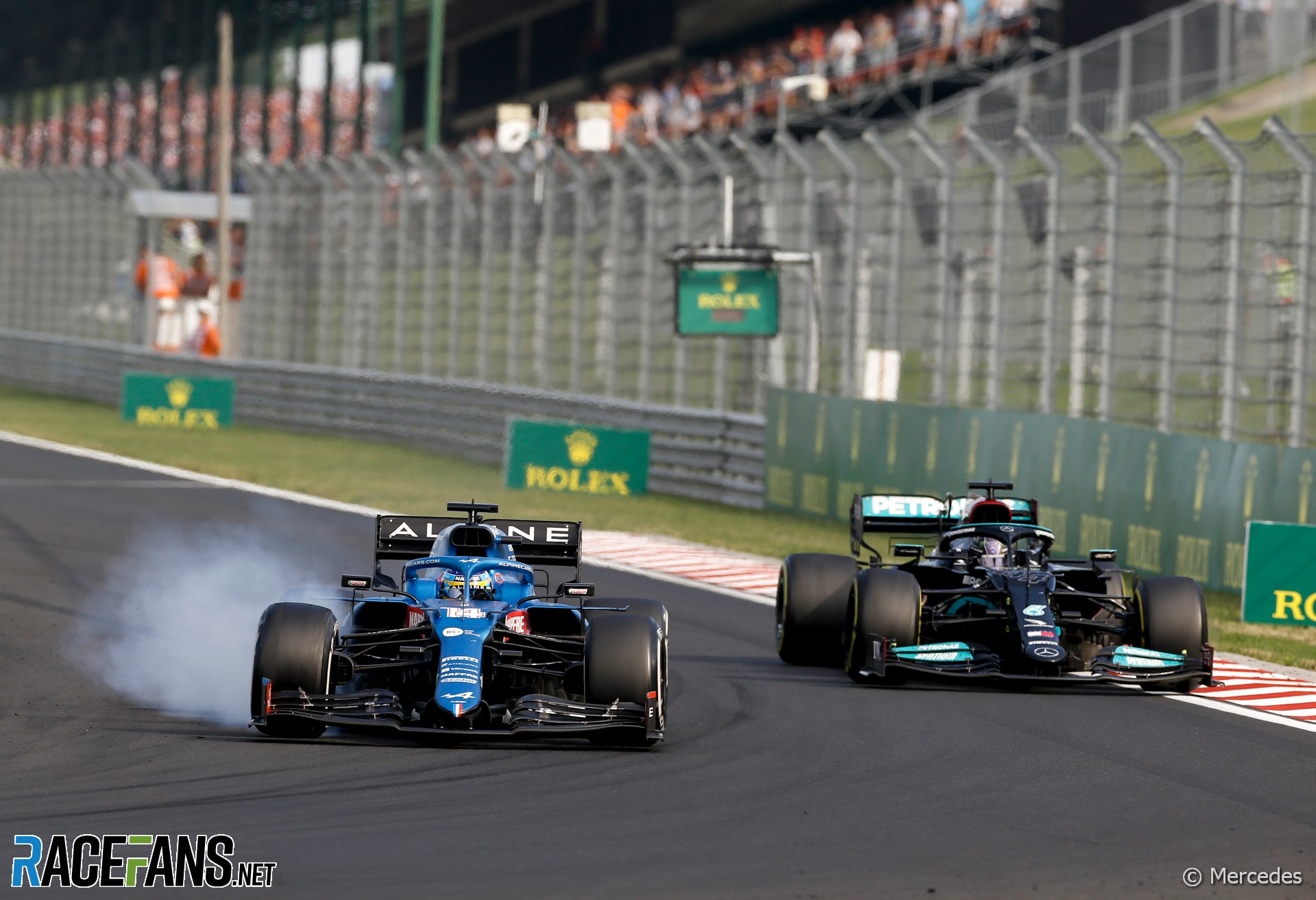 Fernando Alonso thought he had a chance to win, or at least score a podium, during Sunday’s Hungarian Grand Prix.

However Alonso said his speed immediately following his final pit stop gave him hope of passing the cars ahead to win. He was following Lewis Hamilton, Carlos Sainz Jnr, Sebastian Vettel and leader Ocon at the time.

“I was catching Carlos and Hamilton quite quickly,” said Alonso. “I was setting the fastest laps in the race and I thought I will overtake them and I would try to win the race. That was my mind in that moment.

“Then I start realising that maybe winning the race was not possible and overtaking Hamilton and Sainz was the target for sure.”

The race situation changed when Hamilton pitted, dropping behind Alonso but closing on the Alpine with fresher tyres. “Hamilton pitted so it was only Sainz separating myself to the podium,” said Alonso. “So I thought, okay, I will go for it and the podium is a real possibility.

“Then there was not enough pace, on the straight especially, the straight-line speed was lacking to pass Carlos out of the last corner. So I started thinking at that time that if I was right behind Carlos with the DRS I could protect myself and just finish fourth.”

Even that proved impossible, however, as Hamilton eventually found a way past Alonso, leaving him fifth.

“Every battle that I had with Lewis, I was losing the DRS with Carlos because I was defending it,” he explained. “So it was just a fight of trying to keep the fourth, but it was not enough.

“But yes, I was thinking in the podium and even the race for a moment, so I was very optimistic. Too optimistic!”

Alonso was praised by his team for holding Hamilton at bay for 10 laps, delaying his pursuit of Ocon, and helping him win the race. But Alonso said Alpine did not tell him how important it was for their victory hopes that he hold Hamilton up.

“The team didn’t tell me anything,” said Alonso. “I knew more or less what the situation of the race was.

“I was looking at the big screens. I knew that Esteban and Vettel were fighting and they were like two corners in front of us. And with 20 laps to the end and Lewis coming two or three seconds faster, that was enough to win the race, probably. So I knew that every lap I could hold him behind that was gold for Esteban’s win.”

Alonso doubted he would be able to keep Hamilton behind for long at first. “I thought honestly that I could not hold him more than one or two laps.

“But on the last couple of corners, he seemed to struggle a little bit to follow me and then it was enough to open a gap on the straight and defend. I think he learned a couple of different lines in the last three corners after the 10 laps behind me and he was able to pass Carlos just in one lap applying those new lines.”