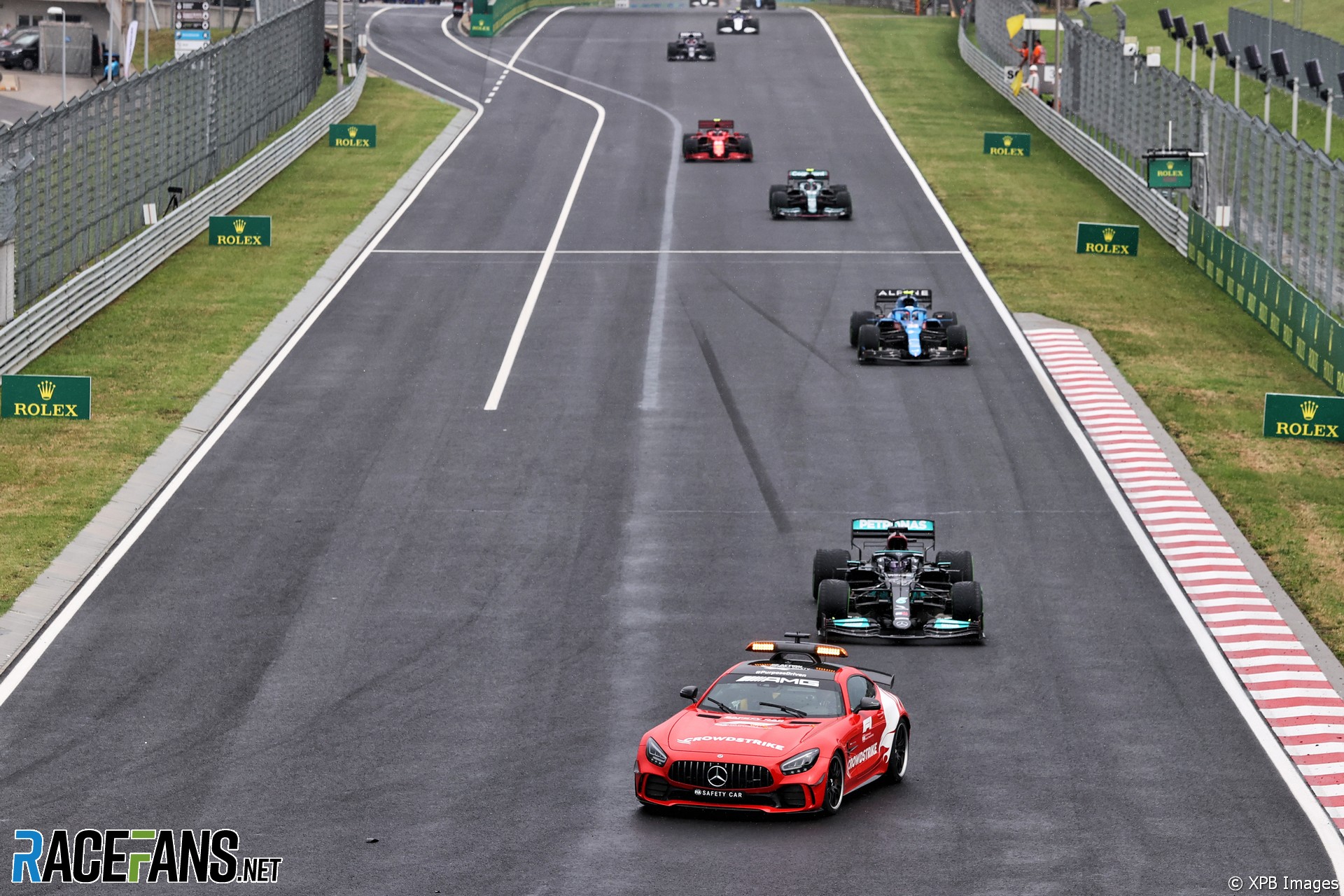 When Lewis Hamilton took the Hungarian Grand Prix restart on his own, and the rest of the field dived into the pits to switch to slick tyres before him, Mercedes quickly realised they were in trouble.

The missed opportunity to change from intermediate tyres to slicks at the restart turned what should have been a straightforward cruise to victory into a long afternoon’s slog to an eventual third place.

Hamilton admitted it was “definitely a mistake from us all”. Red Bull team principal Christian Horner was grateful to see his rivals “made a howler strategically” which cost them a likely win.

But Mercedes stood by the decision immediately after the race. Team principal Toto Wolff said the call was “100% correct” at the time. So what exactly did they get wrong, and how?

At the original start, after the pre-race downpour, every driver left the grid on intermediates. One, Antonio Giovinazzi, returned to the pits to gamble on a switch to slick tyres before the start.

By the time the cars left the pits for the restart half an hour later, no further rain had fallen. The track dried quickly, as it had during the Formula 3 race earlier in the day, yet to Mercedes’ surprise every car in the queue stuck with intermediate tyres.

Immediately after Hamilton left the pits he began telling the team the track was dry. Had this been a formation lap his team would not have been able to reply to him, but it wasn’t, and messages passed back and forth. But the team didn’t call him in. According to Hamilton, they were expecting more rain.

“I was telling the team how the track was through the lap but they said the rain was coming when we got in the car and I thought they had other information,” he said.

“It was dry in all the corners and so I kept telling them ‘dry, dry, dry’ and they said to stay out,” he added.

His radio messages with race engineer Peter Bonnington show Mercedes had no shortage of information about the condition of the track:

Behind him, Esteban Ocon was in two minds about whether to pit. He was reluctant to throw away the second place he’d grabbed at the start.

“So to box when you are P2 on the road, it’s a bit heart-breaking at first, but glad that we did it because we [came out] a long way ahead.”

Ocon left the decision whether to pit or not in the hands of his race engineer Josh Peckett and the rest of the Alpine team:

Teams regularly monitor each others’ radio communications, so Mercedes could have known Ocon behind them was planning to pit. But even with that information available to them, plus Hamilton’s warnings that the track was dry, they kept him out.

The team’s trackside engineering director Andrew Shovlin explained their thinking, which was influenced partly by the championship situation. Hamilton was on course for a win while his closest title rival, Max Verstappen, was out of the points in a badly damaged car.

This was why they played it safe and sent Hamilton out of the pits on intermediates. “The mindset was that, given the situation in the race there and with our competitors, it was one of not making a mistake by slipping off or getting tangled in an accident,” said Shovlin. “So we decided to be cautious and go on the inter.”

The location of Mercedes’ pit box in the pits discouraged them from bringing Hamilton back in immediately. The world champions had the first stall after the pit entry, meaning that if Hamilton led multiple cars in, he would likely have had to wait until they all passed before heading out, costing him a significant amount of time.

“When you’re first garage, you’ve got the disadvantage that as you come in and do your stop, you’ve then got a train of cars following you in who all have pit boxes further down the pit lane,” Shovlin explained. “And then you’ve got to try and find some kind of a gap that you can launch into. And you saw there were a few incidents where people [were] crashing in the pit lane.”

Mercedes were convinced Hamilton would sacrifice the lead and be at risk of a race-compromising incident if they brought him in at that point.

“Looking at it and given that there’s no way that Lewis could ever build five seconds’ gap on a formation lap because everyone’s trying to bunch up and get in, we think we would have been best case P6 on the road, worst case P10, but it would have still been messy and risky,” said Shovlin.

However he still believes the team got it wrong on Sunday: Not with the decision to leave Hamilton out at the restart, but in sending him off on intermediates to begin with.

“When we actually left the pit lane, at that point we were talking about do we go on slicks because we could see it was drying out,” he said. “And that’s really the decision that we got wrong.”

That error cost Hamilton a clear chance to win and pull further ahead of Verstappen in the championship.

“The real mistake we made was we should have rolled out of the pit lane on ‘dries’, as should everyone, because then you don’t need to make the stop,” said Shovlin. “So it was unfortunate and we had an easy opportunity to win the race that we failed to take.

“We were all in agreement that we got it wrong together. So no one’s being blamed for it. But it’s one of those lessons that you learn from. In this industry you try and not make the same mistake twice.”