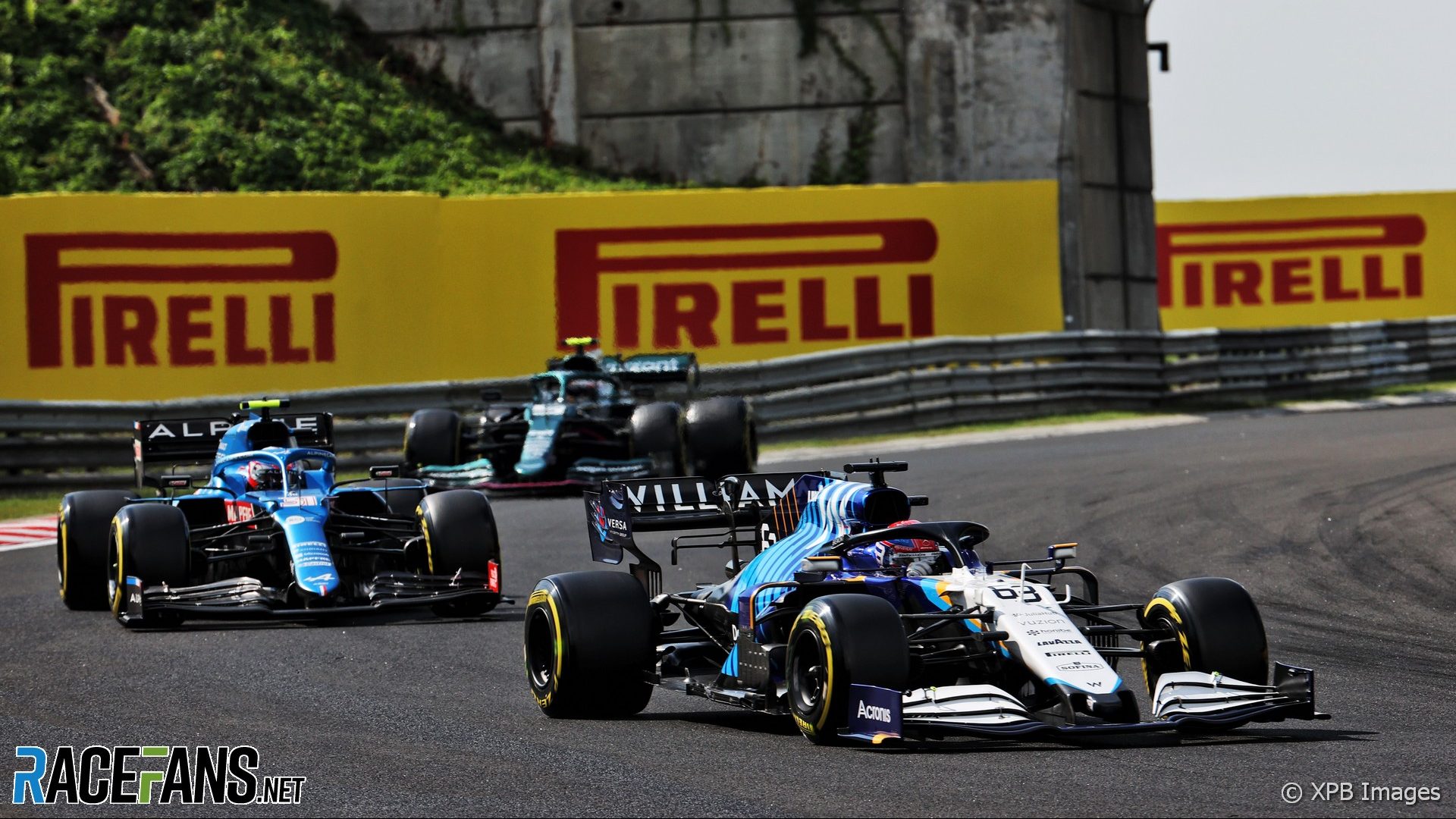 George Russell thanked the FIA for their “common sense” in not penalising him after he illegally overtook cars in the pit lane during the Hungarian Grand Prix.

But it was the Williams driver’s quick-thinking team who ensured he avoided a penalty for the incident.

Following the restart of the race, when all the drivers bar Lewis Hamilton pitted together to switch from intermediates to slicks, Russell spied what he thought was an opportunity to make up a few places.

Russell came into the pits eighth. Formula 1’s rules drivers to leave the pits in the order they arrive at the exit. After pitting, the drivers who came in ahead of Russell duly formed a queue at the pit lane exit.

But as the Williams pit box was situated closest to the exit, Russell spied what he thought was an opportunity to gain an advantage. He drove straight to the exit, passing several cars to his left including Esteban Ocon at the front of the queue.

Russell wasn’t sure whether it was legal for him to do so, and asked his team “can I go to the front of the queue?” as he crept forward. But by the time race engineer James Unwin replied “negative” the pit lane exit light had already gone green and Russell accelerated out in the lead.

Williams reacted quickly. As Russell reached the chicane at turns six and seven he was told to relinquish the places he’d nabbed.

Russell wasted no time in complying, and was back in what Williams judged his rightful position before the pit lane entrance.

Speaking after the race, Russell expressed his gratitude to the FIA for not giving him a penalty for the error, and allowing him to restore his correct position in the running order on-track.

“Firstly, thanks to the FIA for showing a little bit of common sense because I guess they could have easily given me a drive-through or something which would have been a bit harsh,” said Russell.

“It’s such a unique situation, everybody queuing up in the pit lane. I saw an opportunity and I thought, let’s go for it. So I’m glad that we were allowed just to hand the position back and that just shows a bit of common sense really.”

However, contrary to what some television viewers were told in commentary during the race, Russell was not told by the FIA to give the places back. The change of position was instigated entirely by his team, as Formula 1 race director Michael Masi explained afterwards.

“The team came across immediately and said ‘we’ve made a mistake, we’re going to drop back behind Fernando’,” Masi confirmed. “It was actually at the team’s initiation.”

Russell did not actually drop behind all of the drivers who reached the pit lane exit before him. Raikkonen left the pits ahead of Alonso, but ran wide at turn three, and the Alpine driver passed him. Williams told Russell to let Alonso through but not Raikkonen.

Nonetheless Masi indicated he was satisfied with how Williams had handled the situation. “The fact that the Williams pit stop position is at pit exit at this particular event, that’s why they would have had to have dropped back behind,” he said. “Effectively they should start in the order in which they arrive at the pit exit.”

Masi confirmed that had Williams not told Russell to give the positions back, he would not have told them to change places, and passed the matter to the stewards instead: “I would have referred that straightaway.”