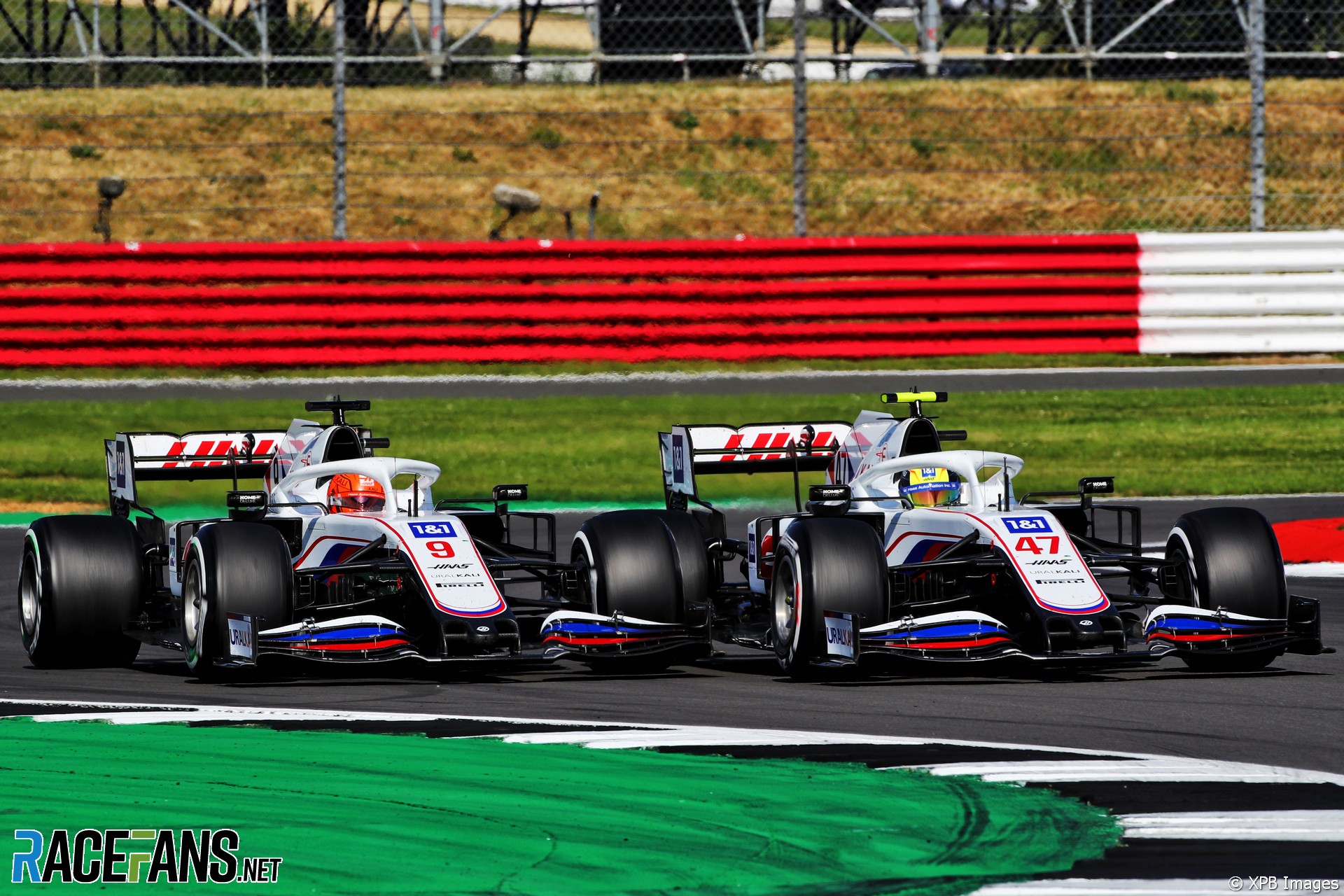 In the round-up: Mick Schumacher aims to learn from his team mate’s tyre management technique.

Schumacher will “have to analayse” Mazepin’s tyre management

Mick Schumacher is looking to learn from his Haas team mate Nikita Mazepin after observing his tyre management early in the British Grand Prix.

“We were unfortunately struggling a bit with both [compounds of] tyres,” said Schumacher. “And I think the approach that we had, we will probably just have to learn from it and try and get back stronger and better person.

“We as a team were trying to not overheat the tyres in the first three laps. And it seems like Nikita was pushing a bit harder in the first few laps and still managed to to keep his tyres in the window. So that’s something I’ll have to analyse why and how, because there was a lot of margin for me to go faster.”

It wasn’t just the early laps where Mazepin had the upper hand, as after jumping him for position when they pitted he was able to finish the race ahead of his team mate by 1.57 seconds while having his mirrors full for over 20 laps.

“Today was a little bit more boring in terms of fights because we were too slow to compete with the top six, but we were a little bit faster than the guys that we have behind,” Fernando Alonso said after finishing seventh in the British GP.

“We just controlled the pace and the tyre management, but I think we had more pace in hand. We didn’t use it, but it was not needed. So happy for this and looking forward to Budapest now. Two weeks with no racing would feel bad, but let’s see.”

The FIA has released the combined stats of the COVID-19 tests it conducted at Formula 1’s British GP, revealing among 5,496 tests there were nine individuals among drivers, teams and event personnel who produced a positive result for the virus. It’s a slight increase on previous events, and came as the paddock raced in front of full grandstands at Silverstone which were permitted as part of the British government’s Events Research Programme.

A statement from Christian. 📝 pic.twitter.com/DOezZvXAQ5

Nice touch from @alo_oficial as he congratulates @LewisHamilton on his win at Silverstone 👋 👊#BritishGP 🇬🇧 #F1 pic.twitter.com/OFhpltY3Er

Nice start to the week! Working flat out with the team… Will come back stronger than ever 💪@redbullracing #nevergiveup pic.twitter.com/12fEIzJ71j

F1 CEO Stefano Domenicali on the future of the sport (GQ)

Stefano Domenicali is running a little late for our meeting but he has a bullet-proof excuse. 'I just got off the phone with Roberto Mancini,' he says. 'Everyone is very happy.'

"Addressed an issue where users would experience a corrupt save if they edited their vehicle's livery from within the MyTeam HQ. Saves that were previously corrupted as a result of this bug will be able to be resumed after applying the patch."

Lots of elements in play for third RLL entry (Racer)

"Who will drive the No. 45 Rahal Letterman Lanigan Racing IndyCar entry in the future? The answer to that question is something Bobby Rahal and his team’s co-owners are looking to find across the majority of the races left on the calendar as they plan for a three-car program in 2022."

Fast, fabulous and thoroughly entertained – all the social VIPs at Silverstone yesterday (Tatler)

"Tom Cruise, by now the face of the British summer season and a guest of Mercedes, was trackside – cheering on his mate Lewis Hamilton. Shaking hands before, they dismissed formalities after, going in for an ecstatic post-race embrace. Few will forget racing legend James Hunt, and his 34-year-old son, Freddie, is a chip off the old block. He was photographed at Silverstone yesterday gallivanting with Ellie Bamber, star of BBC’s The Serpent and The Trial of Christine Keeler, who was in attendance at the races with her younger brother, Lucas."

"Interesting photos feature three-times F1 champion Senna in the cockpit of the Australian and Brazilian Air Force's planes before going on a supersonic flight."

The focus on the crash between Hamilton and Max Verstappen meant other aspects of the British Grand Prix weekend were overlooked – such as Hamilton’s Mercedes team mate Valtteri Bottas finishing third despite having the fastest car once his two rivals collided, as EuroBrun pointed out.

A win is a win, but a third is a poorly performing driver who should have been able to easily win when one of the two best drivers is out of the race, and the other has a penalty.

The Hamilton / Verstappen incident will cause many things from this weekend to be missed or quickly forgotten.EuroBrun

Get the best of our motorsport coverage after every F1 race in your inbox – sign up for the free RaceFans email Newsletter: