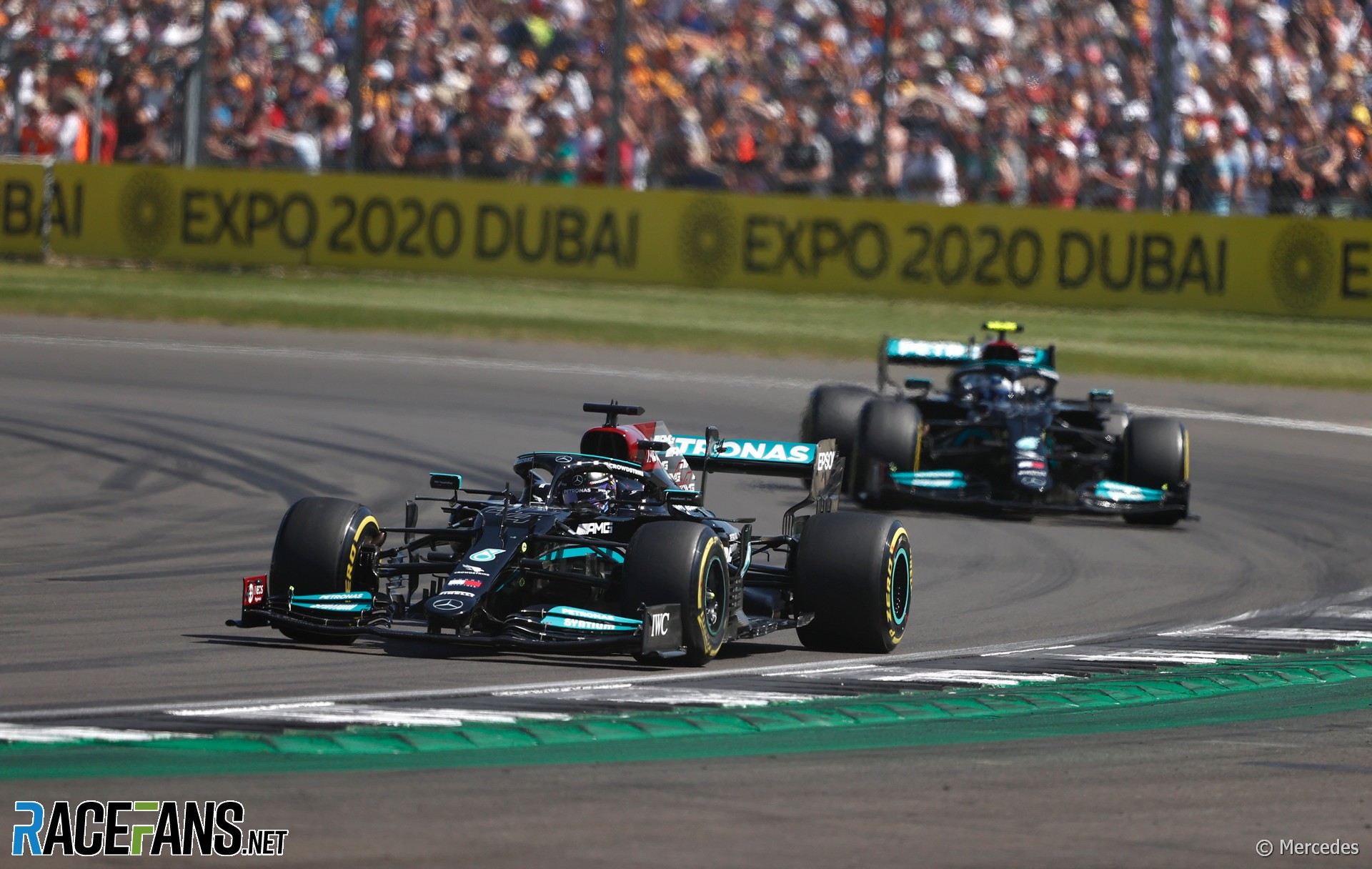 Hamilton was handed a ten-second penalty for colliding with Verstappen at Copse corner on the opening lap, taking the championship leader out of the race and causing it to be red flagged.

Despite the penalty, Hamilton was able to recover from fourth place to catch Leclerc and pass the Ferrari at Copse with three laps to go.

At the start, Hamilton pressured Verstappen for the lead with the pair running side-by-side through Abbey. Verstappen defended, but Hamilton launched further assaults on his rival into Brooklands and Luffield, with Verstappen able to remain ahead.

Hamilton got into Verstappen’s slipstream through Woodcote and pulled to the inside of his rival as the pair entered the 280km/h Copse corner. The pair collided, with Hamilton’s left front wheel hitting Verstappen’s right rear wheel, pitching the Red Bull driver into a spin.

Verstappen crashed heavily into the barriers, bringing out an immediate safety car. Despite a reported 51G impact, Verstappen was able to climb out of the car and walk into a waiting ambulance unaided. He was evaluated in the medical centre before being taken to hospital for further examination.

The race was red flagged to recover Verstappen’s car and repair the barriers while the stewards confirmed they would investigate the accident. The clash had allowed Leclerc through into the lead by the time the safety car was deployed, meaning the Ferrari driver would lead the field for the standing restart.

When the race did restart, Leclerc held onto the lead, ahead of Hamilton and Lando Norris, who passed Valtteri Bottas to move up to third place. Sebastian Vettel spun his Aston Martin exiting Luffield, but avoided the barriers and was able to continue.

Hamilton pursued Leclerc, but was informed he had been awarded a ten second time penalty by the stewards for causing the collision with Verstappen on the opening lap.

Leclerc was able to keep a comfortable lead over Hamilton, until he began complaining that his engine was cutting out on lap 15. Hamilton immediately began to pick up the pace and put pressure on the race leader, but was unable to get close enough to challenge the Ferrari.

Hamilton eventually pitted on lap 27, serving his ten second penalty and rejoining in fourth place, behind Bottas as Norris. The Mercedes driver quickly passed the McLaren of Norris to move up to third behind his team mate.

Bottas was given a direct team order not to fight with his team mate and then later instructed to allow his team mate by into Stowe, which he duly obliged, moving Hamilton back up into second.

With a ten second gap to make up to Leclerc, Hamilton began eating away at the Ferrari’s lead. Hamilton was within DRS range of the leader with just under four laps to go as the Silverstone crowd roared in support.

Hamilton was able to get in the slipstream of the Ferrari through Woodcote and moved to the inside of Leclerc. While Leclerc kept ahead through the corner, he understeered wide and off the circuit, allowing Hamilton through to take the lead.

Leclerc finished second, with Bottas rounding out the podium. Lando Norris and Daniel Ricciardo finished fourth and fifth for McLaren with Carlos Sainz Jnr taking sixth in the second Ferrari.

Fernando Alonso finished seventh for Alpine, ahead of Lance Stroll and Esteban Ocon with Yuki Tsunoda taking the final point in tenth.

Sergio Perez took the fastest lap in 16th place to deny an additional point for Mercedes having pitted for soft tyres.