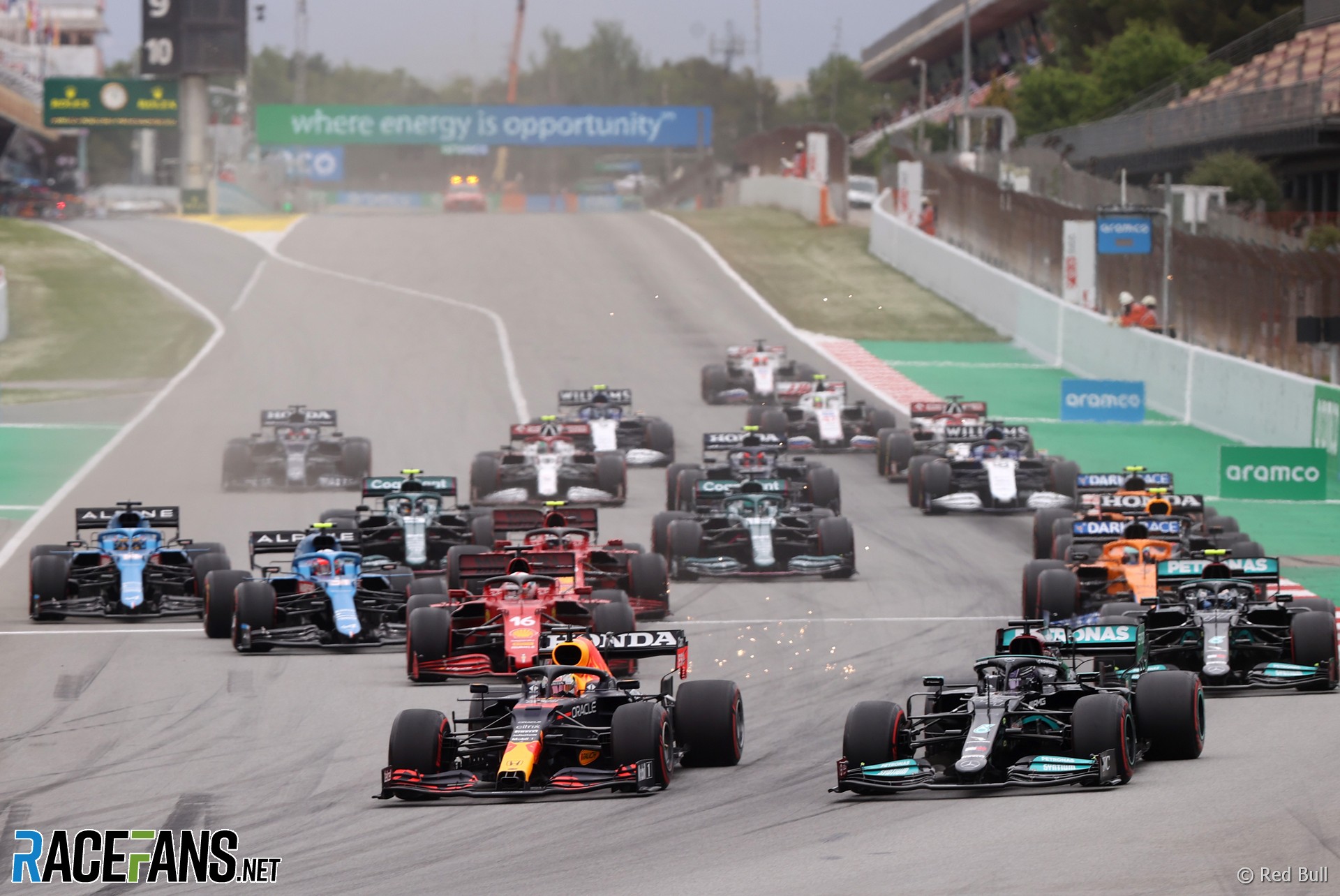 Lewis Hamilton took victory in the Spanish Grand Prix after chasing down and passing Max Verstappen in the closing laps.

Hamilton lost the lead of the race from pole position, but Mercedes took a strategic call to bring him in for an extra pit stop, allowing him to push to make up the gap to Verstappen before passing him with the advantage of fresher tyres.

At the start, Hamilton and Verstappen ran side-by-side on the almost 600 metre run to the first corner, with Verstappen to the inside. Both braked as late as they dared, with Verstappen boldly throwing his Red Bull to the inside, forcing Hamilton to yield the lead. Behind, Charles Leclerc swept clean around the outside of Bottas in turn three to take third place from the Mercedes.

Verstappen and Hamilton quickly pulled away from the field until the Safety Car was deployed on lap eight when Yuki Tsunoda’s Honda power unit switched off on the approach to turn 10, forcing the AlphaTauri to park on the exit of the corner.

Verstappen kept the lead when the race restarted on lap 11. As the field started to take their first stops of the afternoon, Hamilton began to put the race leader under intense pressure.

Verstappen was the first to pit for fresh mediums, but a slow stop appeared to put his race lead in jeopardy. However, Mercedes opted not to bring Hamilton in immediately to claim track position, preferring to keep their driver out for a longer first stint.

With the pace advantage from new tyres, Verstappen was able to reclaim the time lost in his slow stop and retake the lead when Hamilton eventually pitted at the end of lap 28.

Hamilton was able to rapidly catch the leading Red Bull with his fresh medium tyres, but struggled to get close enough to Verstappen to make any genuine attempt to pass. After a number of laps behind the leader, Hamilton and Mercedes opted to pit for a second time for a news set of mediums.

Red Bull chose not to respond and leave Verstappen out, meaning the fight for the win would come down to whether Hamilton could catch and pass the race leader over the remaining 24 laps.

Hamilton began his pursuit of the leader, taking seconds out of Verstappen’s lead with every lap. Hamilton’s progress was temporarily frustrated by Bottas, who was less than accommodating in allowing his team mate to pass.

Eventually, Hamilton cruised up to the rear wing of the leader and as the pair began lap 60, Hamilton used DRS to breeze around the outside of Verstappen and into the lead. Verstappen immediately pitted for fresh soft tyres, retaining second place and easily posting a new fastest lap.

With Verstappen now far behind, Hamilton easily checked off the final few laps to take the chequered flag and take his third win in the opening four races. Verstappen finished second, 15 seconds behind, while Bottas rounded out the podium once again.

Leclerc finished fourth for Ferrari, with Sergio Perez in sixth after starting in eighth. Daniel Ricciardo was the highest-finishing McLaren in sixth, with Carlos Sainz Jnr in seventh ahead of Lando Norris.

Esteban Ocon and Pierre Gasly rounded out the points after a drag race to the chequered flag.