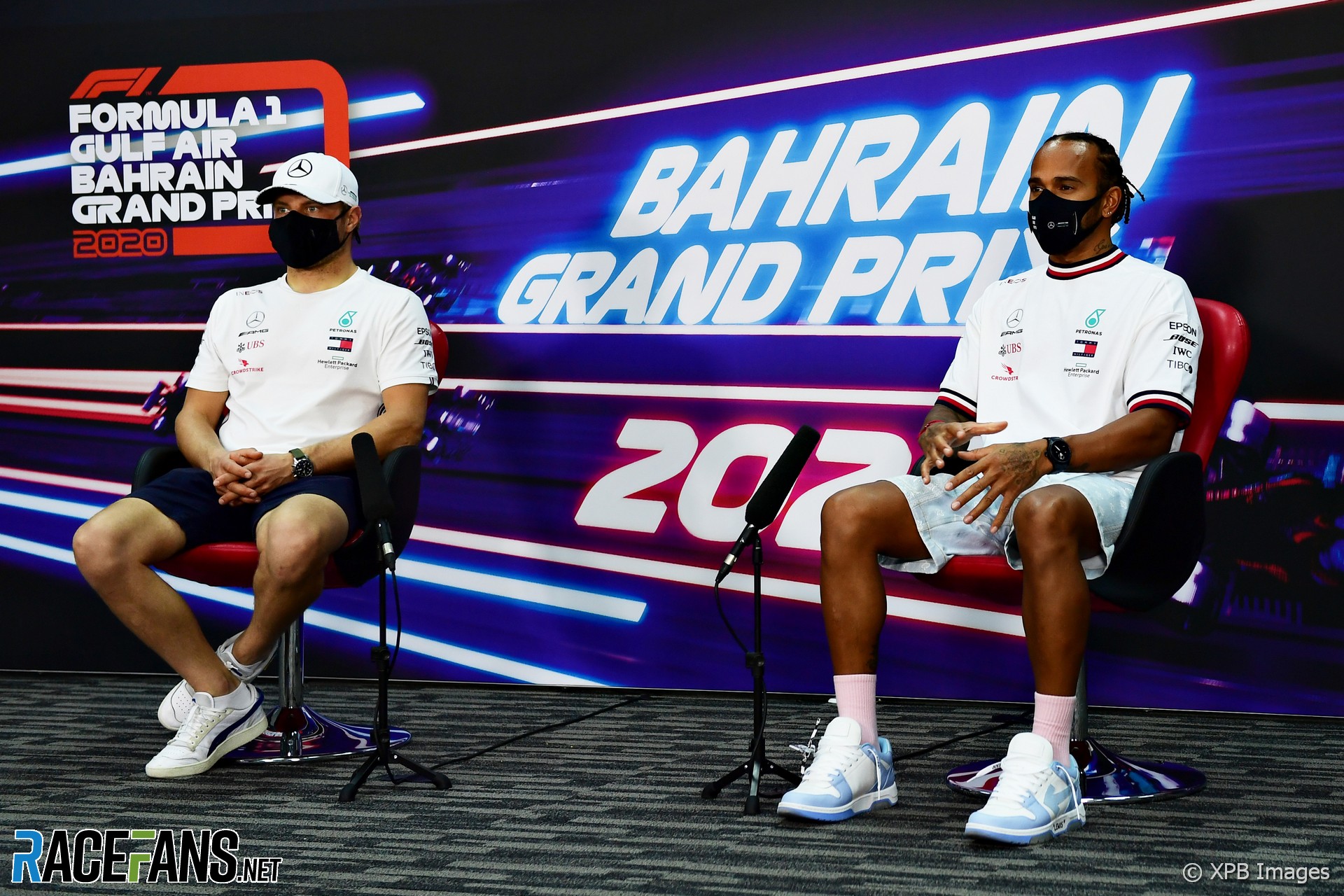 Lewis Hamilton may have put a lock on the world championship with three races to spare, but yesterday he was at pains to praise how well his team mate had done to keep the championship fight alive.

In Hamilton’s view, Valtteri Bottas has edged closer to him in pure performance this year. Unreliability and the quirks of the points system have exaggerated the difference between them in the championship standings, says Hamilton.

Is he right? Let’s take a look at the data:

How Hamilton and Bottas compare

“Naturally, Valtteri is just getting stronger and stronger each year,” said Hamilton yesterday. Referring to the short-lived social media craze for ‘Bottas 2.0’ which followed his team mate’s victory in last year’s season-opener, he added: “The media have commented on the ‘2.0’, et cetera.

“Every year you can see him just grafting away, chipping away, trying to raise the bar in so many different areas,” Hamilton continued. “In race trim you can see the consistency that I’ve had this year is really what’s made the difference. But if you look on the race weekends, it was so close.”

Hamilton is, of course, far better placed to comment on Bottas’s work behind the scenes than we are. But looking at the raw results from this year so far compared to last year, it’s hard to discern an improvement. If anything, Bottas may have slipped back slightly.

We are comparing an abridged and incomplete season of 14 races against last year’s full season which, with 21 rounds, is 50% longer. Nonetheless it’s clear that in proportional terms Bottas hasn’t qualified, lapped or finished ahead of Hamilton as often as he did last year.

Hamilton believes the points gap between the pair is exaggerated partly by the “gap of seven points” between first and second place. “Valtteri was also unfortunate this year with a reliability issue,” Hamilton added, “so it makes that gap even bigger than it [really] is.”

There’s two sides to this. Yes, the difference between first and second is more than twice the three-point gap between second and third. But this was also the case last year, so that doesn’t tell us so much about how well the points difference illustrates their relative performance.

Hamilton has a point about Bottas’s unreliability, however. Not only did he have a power unit problem at the Nurburgring, but at Silverstone both drivers suffered late punctures, and while Hamilton was still able to win, Bottas dropped out of the points. Even if we ungenerously assume these setbacks cost him third and second place finishes respectively, Bottas would be 33 points better off, and still mathematically in championship contention.

One other crucial respect in which Hamilton believes Bottas is performing better is qualifying. Here, too, he may be being a little generous.

“If you look at a lot of the qualifying [sessions], it was the smallest of margins,” said Hamilton. “So closing the gap in qualifying he has done already, which has made it quite challenging. It already did last year but I would say even more so this year.”

Looking at the qualifying gap between them over the course of this year (above), it’s clearly been close. Bottas missed out on beating Hamilton to pole position by less than a tenth of a second three times, and by a tenth twice more.

It cuts both ways, however; Bottas beat Hamilton by less than a tenth on three occasions (Hamilton lost pole position the first time that happened due to a penalty).

On average, it’s hard to see the improvement Hamilton discerns here. Bottas was 0.122s slower than him on average last year. This year, even if we factor out the ‘outlier’ of Styria, the gap is 0.165s.

These are small gaps. But again it looks like Hamilton is giving Bottas a bit too much credit. In terms of performance if the pendulum has swung either way, it’s not by much, and it’s in Hamilton’s favour.

Hamilton is right – and very fair – to draw attention to Bottas’s improved scoring rate this year and the fact he has lost more due to bad luck with his machinery. That said, there is another significant factor here which hasn’t been discussed: Mercedes’ rivals are weaker this year, and less able to take points away from them.

Nonetheless, it is clear Hamilton has nothing but respect for his team mate’s mental stamina and work ethic.

“People need to give Valtteri his due respect,” he said. “You’ve got to remember who he’s driving up against. It’s not easy being my team mate but he comes in weekend in, weekend out with the same mentality, he’s never moaning, complaining that something’s wrong with the car, it’s always just ‘I’ve got to do a better job.’

“I don’t know any other driver that does that here and I think that’s something we share in common. I’d like to think we come into these weekends with a fresh head and I think mentally he’s one of the strongest drivers here.”

If you've enjoyed RaceFans' motor sport coverage during 2020, please take a moment to find out more about our Supporter Drive.

We're aiming to welcome 3,000 new Supporters to help fund RaceFans so we can continue to produce quality, original, independent motorsport coverage. Here's what we're asking for and why - and how you can sign up:

34 comments on “Is Hamilton’s praise for Bottas’s performance backed up by the data?”