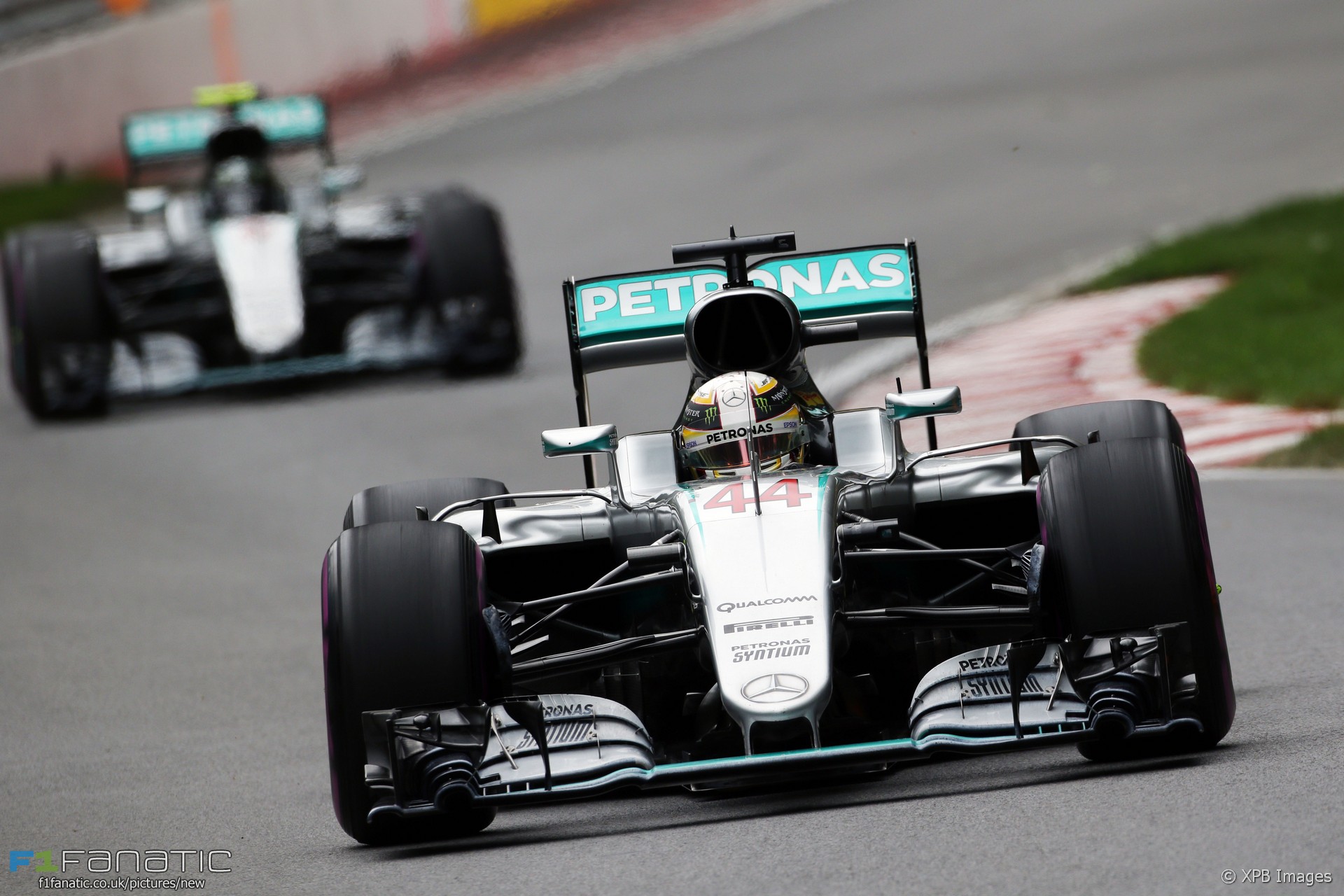 Lewis Hamilton has known since the Japanese Grand Prix that winning all the remaining races is his best possible route to the championship. But he’s also known that won’t necessarily be enough.

As long as Nico Rosberg keeps finishing in second place, he will take the crown. And that’s exactly what Rosberg’s done in the two races since Japan.

Time is running out for Hamilton. If he keeps up his current run of form and wins the remaining races he won’t win the title unless he also achieves the following: Get at least one car per race to separate him from Rosberg at the flag.

The Red Bulls have come close to helping Hamilton. Had the Virtual Safety Car not played into Rosberg’s hands in Austin he would have had to pass Daniel Ricciardo on the track. In Mexico it was Max Verstappen’s turn to put Rosberg on the back foot: he came close to making a pass on two occasions.

Hamilton must have rewatched those races through gritted teeth. Twice Rosberg could have lost points. Now there are only two races left.

If Hamilton leads a Mercedes one-two for the third race in a row this weekend he will go to Abu Dhabi needing to win with Rosberg finishing off the podium to become champion. Can Hamilton afford to wait until the last race to start thinking about how he could influence his team mate’s finishing position?

The difficulty of slowing a rival

Has it been done before? Delaying a rival in the hope another driver will pass them is has seldom been seen in F1. One notable example occurred at Suzuka in 1997.

Championship leader Jacques Villeneuve was racing under appeal following a yellow flag infringement in practice. The Williams driver took the lead of the race ahead of title rival Michael Schumacher and before the end of the first lap backed off his pace in the hope Schumacher would be passed by third-placed Mika Hakkinen.

Villeneuve’s plan began to go awry when Schumacher’s compliant Ferrari team mate Eddie Irvine came into play. Irvine swept past Hakkinen and Schumacher on the second lap and appeared on Villeneuve’s tail. Villeneuve let Irvine go and continued to drive around four seconds off the pace in the hope Hakkinen would pounce on Schumacher.

Hakkinen couldn’t find a way by, and dropped out of contention after pitting. Villeneuve’s pit stop then dropped him behind Schumacher, who went on to win the race with ease after Irvine let him through. Villeneuve took the flag in fifth but his exclusion from the results was later upheld. His blocking tactics had failed to pay off.

Holding Rosberg up, and hoping a Red Bull or Ferrari jumps ahead of him, may be Hamilton’s last and best chance to hold onto his crown. But this is tricky territory.

First, Hamilton would need to strike the fine balance of holding up his team mate yet doing so in a way deemed legal by the ever-watchful stewards. Even a reprimand could mortally wound Hamilton’s title hopes, as he has already picked up two this year and a third would incur an automatic ten-place grid penalty.

Second, Hamilton would have to slow Rosberg down without compromising his own race. A repeat of their Spain collision would play into Rosberg’s hands, as Hamilton must reach the finish to narrow the 19-point gap.

Finally, Hamilton needs to do all this while fighting the one rival who has the greatest opportunity to scrutinise everything he does: his team mate. It would be a lot harder to pull the wool over the eyes of a championship rival from another team.

But it may be the only remaining chance for him to win the title. So how could he make it work?

Where can Hamilton hold Rosberg up?

The first challenge Hamilton faces is how can he hold Rosberg up. The obvious difficulty is that slowing Rosberg down will bring his team mate close enough to use DRS, giving Rosberg an opportunity to overtake.

Holding up another driver is far easier at some circuits than others. Hamilton may therefore already be wondering which of the remaining two venues offers the best opportunity to hold his team mate up.

Waiting until Abu Dhabi could be a mistake. Yas Marina is wide with vast expanses of asphalt run-off. Two long DRS zones make overtaking more straightforward than at other circuits.

It may be easier for Hamilton to disrupt Rosberg’s race at Interlagos. Hamilton spent basically all of the last two Brazilian Grands Prix stuck behind his team mate so he’s well aware how tricky overtaking can be there, particularly in the narrow and sinuous middle sector.

But even so he could be vulnerable on the long drag to the start/finish area if he tries to slow Rosberg down too much. Cunning use of his energy harvesting and deployment may allow him to sprint clear when he needs to, though of course Rosberg will be anticipating such tactics.

There are more complications. As we’ve seen before, Mercedes obey the convention of giving the first opportunity to pit to whichever driver is leading on the track. This is to preserve the running order of the two cars. If the chasing driver was first to benefit from the ‘undercut’ – the performance advantage of a fresh set of tyres – they could jump ahead of the leading driver.

But in races where one car has been holding up the other they have warned the leading driver to pick up the pace or risk losing first priority on pit stops. We saw this just a few races ago in Hungary and last year in China too.

Mercedes say there will be no change in the way they operate their strategy for the remaining races. Regardless of the fact the constructors’ championship has been decided, the team will understandably continue to prioritise getting the maximum score for each car in the race.

Therefore if Hamilton is going to try to back Rosberg up he needs to choose his moment carefully.

The opening laps of the race would be one opportunity. It would be too early for Rosberg to make a pit stop and the field behind them will not have spread out, leaving him without a ‘pit window’ in which he could make a stop and come out without a car immediately ahead of him. However Hamilton will probably only be able to afford to do this for a few laps.

A mid-race Safety Car, after which drivers usually run to the end of the race on a suitably durable tyre, could give another chance to slow Rosberg’s pace and bring rival cars within range. Similarly the closing stages of a race, at which point little can be done to alter the race strategically, would be a useful time to edge Rosberg back towards any chasing cars.

However all of these scenarios rest on the assumption that Hamilton can get in front of Rosberg in the first place. And while he has done so in recent races, he has not out-qualified Rosberg in any of the three previous races in Brazil since they became team mates at Mercedes.

Hamilton’s championship situation means he will have to start thinking about how he can disrupt Rosberg’s race. That will add a fascinating extra dimension to the final rounds.

But unless Hamilton raises his game in Brazil this weekend all these considerations could become irrelevant. And that would seal the title for his team mate.

78 comments on “How Hamilton can disrupt Rosberg’s title run”