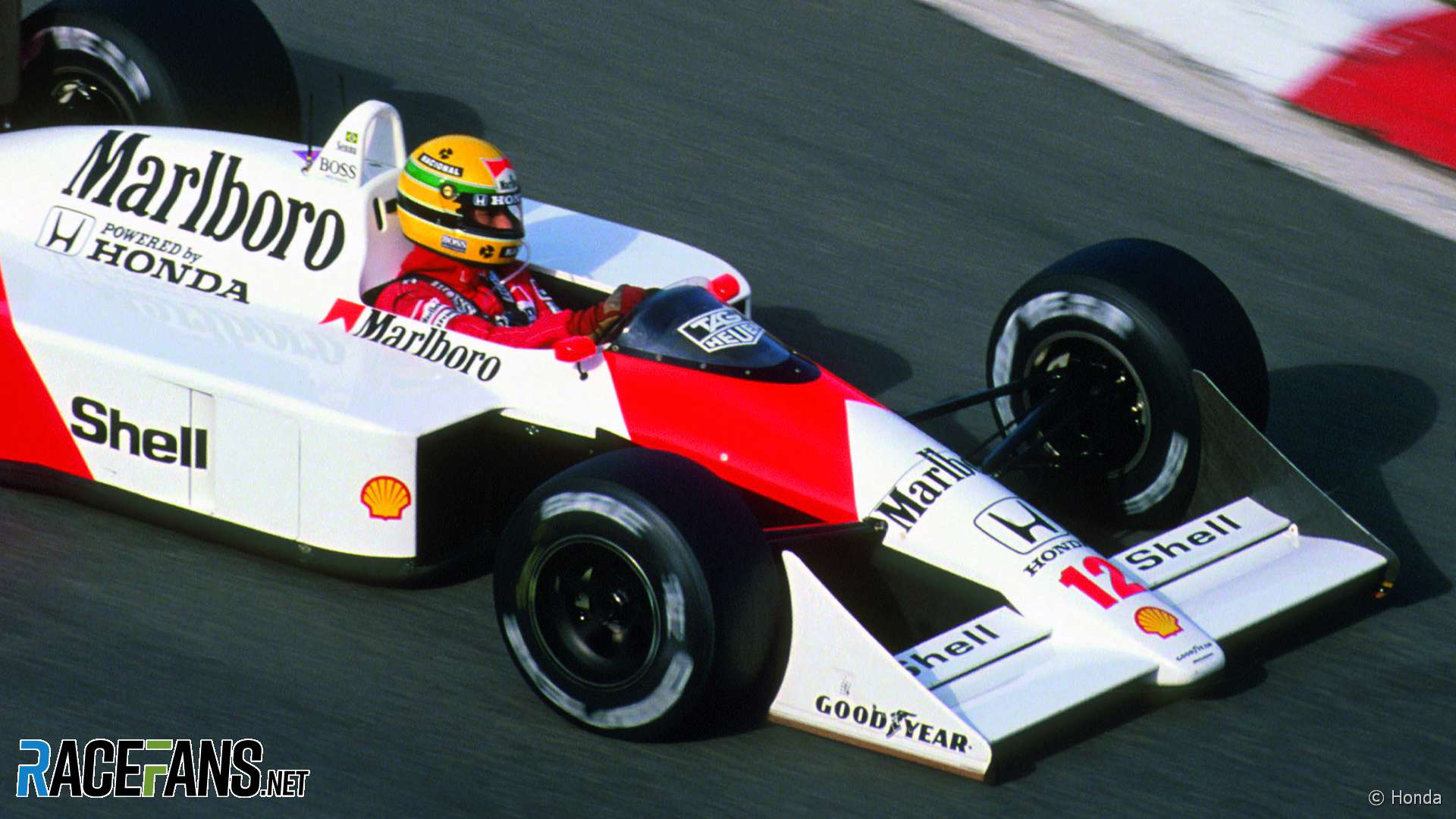 Ayrton Senna scored his first win for McLaren on this day 25 years ago in the San Marino Grand Prix.

He led a crushing one-two for the team. He and team mate Alain Prost were the only drivers to complete all 60 laps at the Autodromo Dino Ferrari in Imola.

Wielding the devastating Honda-powered MP4-4, Senna picked up the first nine points on the way to his first world championship triumph, all of which came with McLaren.

But May the 1st is also a poignant date in the history of Ayrton Senna. Exactly six years after that maiden McLaren win, Senna lost his life in a crash at the very same circuit.

If you thought you saw dominance in 2011, when Red Bull typically had a few tenths of a second over their rivals in qualifying, think again.

Behind the two McLarens on the front row of the grid for the San Marino Grand Prix, Nelson Piquet’s identically-engined Lotus 100T was a staggering 3.3 seconds slower. In the race, both McLarens lapped quicker than anyone else qualified.

Lotus, unlike McLaren, had the advantage of familiarity with Honda’s engines having used them the year before. But the car, Gerard Ducarouge’s last design for the Hethel team, suffered from an excess of drag and no longer enjoyed the active suspension developed by the team at Senna’s urging the year before.

The turbo-powered teams had long enjoyed a surfeit of power which had allowed them to crank up wing angles for more downforce regardless of the consequent increase in drag. But in 1988 the FIA’s cut in turbo boost pressure from 4 bar to 2.5 and reduction of fuel tank size from 195 litres to 150 had checked their power advantage.

Others were alert to the importance of efficient downforce. Among them was March designer Adrian Newey, who had developed the last three Indianapolis 500-winning cars in an environment where aerodynamics were critical.

His new 881 chassis, entirely conceived on wind tunnel work, pointed the way forward for F1 car design. Tightly sculpted around the dimensions of its drivers, the Leyton House team found the new car piled on more downforce than its predecessor without adding drag.

This was especially important as they lacked a turbo and used John Judd’s 3.5-litre V8 engine instead. At Imola, as in the season-opening race in Brazil, Ivan Capelli lined up a promising ninth on the grid. Alain Prost’s attempt to beat Senna’s time was wrecked when he came across former team mate Rene Arnoux. Too busy grappling with the evil-handling Ligier JS31, Arnoux put Prost onto the kerbs, causing minor damage to the McLaren.

That secured pole for Senna, who had switched chassis after damaging his car from Brazil in a crash in testing at the Imola track.

Neither Ligier made the cut. For Stefan Johansson, the sight of his replacement at McLaren qualifying on pole position with a lap 8.5 seconds faster than his must have been especially galling.

With 31 cars entered for the race a pre-qualifying session was originally planned. It was called off when Osella’s single-car entry – appropriately called FA1L – did not pass scrutineering.

However Alex Caffi put Dallara’s single entry on the grid for its first ever race. The struggling Euro Brun and Zakspeed teams – the latter plugging away with their own four-cylinder turbo – had one car each in the race.

Those waiting in expectation to see if there might at least be an exciting contest for the lead between the two McLaren drivers had their hopes dashed quickly. Prost’s car stuttered away from the line, leaving Senna to sprint off into an unchallenged lead.

Having come around at the start of lap two in sixth place, it took Prost until lap eight to pick off his rivals and take up second place. He did this with cruel ease, out-dragging Gerhard Berger’s turbo-powered Ferrari as if it were a DFV-engined backmarker on the uphill climb to Piratella.

But by the time Prost had demoted Piquet to third on lap eight his team mate was eight seconds up the road. He never made serious inroads into that deficit until Senna backed off in the closing stages.

‘Best of the rest’ battle

Had it not been for the unreal speed of the McLarens, the FIA’s attempts to redress the balance between the turbo-charged and regular cars would have been judged a triumph. For behind them an excellent battle for third place raged between Piquet, Berger and their normally-aspirated rivals Riccardo Patrese, Thierry Boutsen, Alessandro Nannini and Nigel Mansell.

Nannini’s Benetton passed Berger early in the race then applied fierce pressure to Patrese, who made his Williams as wide as possible. Lap after lap Nannini dodged around in his mirrors on the flat-out run through Tamburello and Villeneuve to the Tosa hairpin. On one lap he had to abandon a move as Stefano Modena’s dawdling Euro Brun got in the way.

Their respective team mates were next to pass Berger, who was minding his fuel consumption. The four normally-aspirated cars briefly formed a high-speed quartet, until Nannini launched a surprise attack on Patrese at Tosa to claim fourth. Boutsen and Mansell picked of Patrese in rapid succession, and now the two Benettons went hunting Piquet’s Lotus.

While Nannini concentrated on Piquet, Boutsen almost went up the back of his team mate at the Variante Alta chicane. Mansell seized the opportunity to claim fifth. That became fourth when Nannini spun at Tosa.

Now it was Mansell’s turn to attack Piquet, and on lap 40 he dived down the inside of his former Williams team mate at Rivazza to claim the place. But it was short-lived: at the fastest part of the track the superior power of the Lotus blasted it ahead. Moments later, Mansell’s Judd engine cried enough, leaving the Benettons to attack Piquet.

Berger came on strong towards the end of the race, picking off Patrese whose exhaust had broken. On the final lap Berger barged Nannini aside to claim fifth.

Goodyear were the only tyre supplier, and their conservative compounds meant none of the top six visited the pits.

Berger’s last-lap lunge salvaged something for Ferrari in what turned out to be their last home race before the death of founder Enzo Ferrari. Having qualified tenth, Michele Alboreto started last after stalling on the grid. He recovered to eighth until his engine died six laps from home. Already rumours were circulating that Alboreto’s fifth season at Ferrari would be his last.

Eddie Cheever finished out of the points in seventh, the ex-BMW Megatron engine in his Arrows suffering from a lack of power. At one point he thought Alboreto’s Ferrari was bearing down on him to overtake, but it turned out to be the black-and-orange AGS of Philippe Streiff. Cheever hurriedly cranked up the boost to spare himself the ignominy of being overtaking by an inferior car which was 25kg over the minimum weight limit for normally aspirated cars.

Capelli’s race lasted two laps until his gearbox selected two gears simultaneously as he braked for the Variante Alta, spinning him out.

The 1988 San Marino Grand Prix was not an exciting race. It did not witness a stirring battle for the lead, the first appearance of a game-changing new technology, or a controversial crash between two bitter rivals.

Aside from its retrospective significance for being Ayrton Senna’s first victory for McLaren, it was a somewhat unremarkable affair. It was exactly the sort of race Formula One tries to avoid having these days.

Today’s strict technical regulations have narrowed the gap between the front running teams to the point that a margin of victory such as that seen at Imola in 1988 is unthinkable. Mandatory pit stops, rapidly degrading tyres and DRS add further spice to the all-important ‘show’.

While F1 in 1988 did not have such artificial devices nor such strict rules, the consequence was the racing could often be one-sided and processional. That was inescapably true at Imola that year.

Whether Formula One should prioritise entertainment over sporting integrity to the degree it has is a debate which continues to recur in the comments here.

Next year the resumption of competition between engine manufacturers in development of the new engine formula opens up the possibility of one team stealing a march on the opposition and dominating the championship. What will an audience which has seen 32 lead changes in the last four races make of that?

How well do you remember the San Marino Grand Prix? Take the F1 Fanatic quiz: