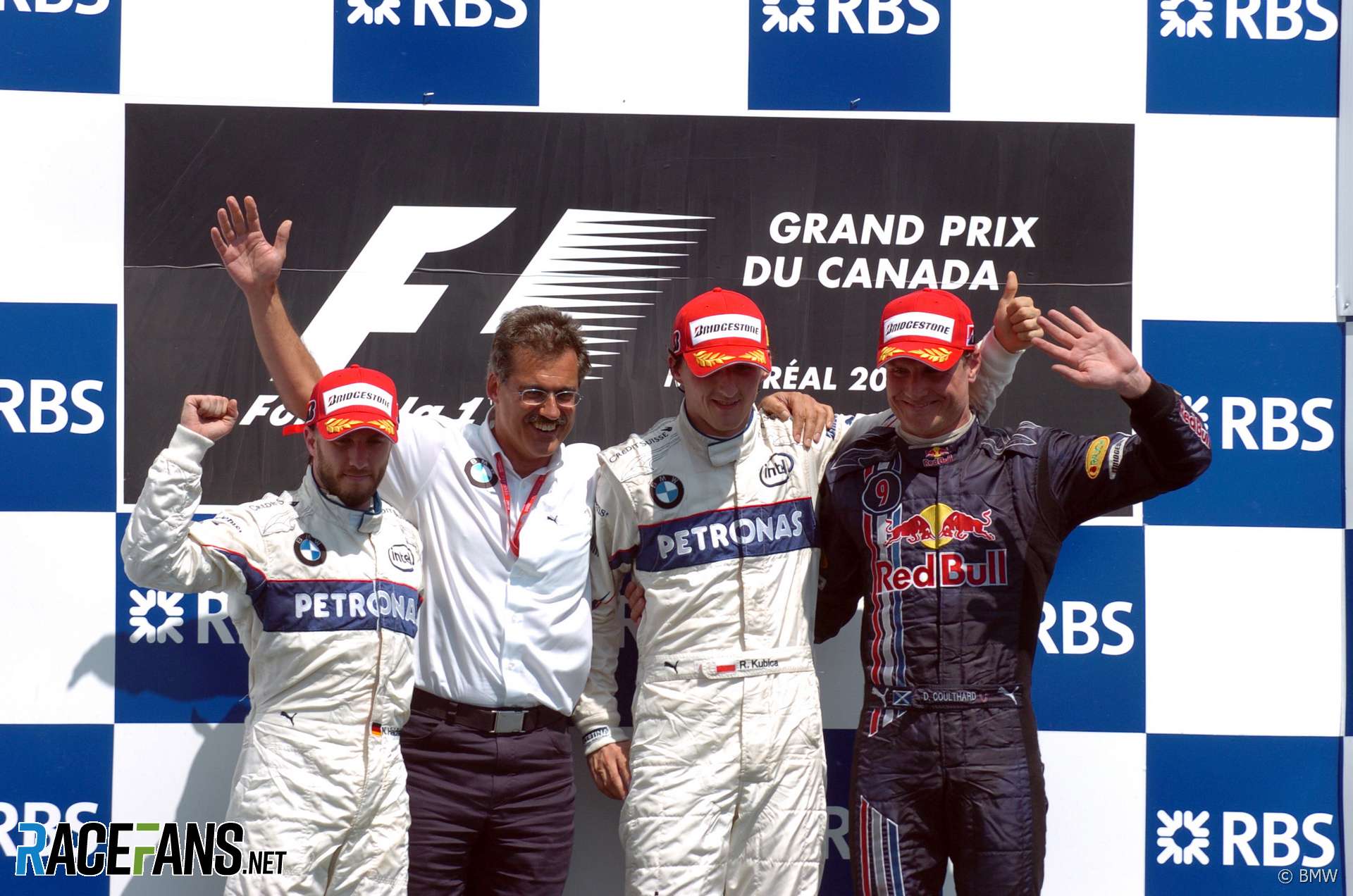 Everyone expected drama on the track during today’s Canadian Grand Prix but the most remarkable incident of the afternoon occured in the pits as Lewis Hamilton slammed his McLaren into the back of Kimi Raikkonen’s Ferrari.

That handed Robert Kubica the opportunity to win his first Grand Prix and he did so in excellent fashion as the deteriorating track surface claimed a string of drivers.

Race against time to fix track

With the race organisers using every spare moment before the race to treat the sections of track that had started to fall apart during qualifying, the drivers headed out into the unknown at the start of the Canadian Grand Prix.

Turn ten, which in recent years has been repaved and repaired several times, had bee patched up several times.

Earlier on the lap turns six and seven had also been treated as had the hairpin at turn two. The drivers were even warned not to touch the apices of these corners as they set off on the formation lap to give the track the best chance of curing.

Hamilton pulls away at the start

Hamilton converted his second consecutive pole position at Montreal into the lead, braking early for turn one as Kubica slotted in behind him.

The race began in orderly fashion with Nico Rosberg sweeping around the outside of Fernando Alonso to move up to fifth. Jarno Trulli nipped past his team mate Timo Glock on the run up to turn six and Kazuki Nakajima put a bold pass on Mark Webber at turn ten as everyone looked out for the first signs of deterioration.

The opening laps went smoothly with Hamilton, on soft tyres, quickly building up a lead over Kubica and Raikkonen, both on hards. He had a 5.4s advantage by lap 12, but Raikkonen shortly began cutting into Kubica’s 3.7s advantage.

Nelson Piquet Jnr made use of his lightly-fuelled Renault to pass both the Toyotas, lunging at Trulli from a distance at turn ten and banging wheels with the Italian.

It was a surprise to see the first retirement of the race was apparently down to mechanical failure rather than driver error: Adrian Sutil’s Force India came to halt between turns two and three. Race control were evidently reluctant to deploy the safety car at such a sensitive moment for the race strategists but after two laps a hot brake had started to smoulder and the safety car was summoned while the conflagration was put out.

And so a problem for Sutil summoned the safety car and led to the transformation of the race – just as had happened last year. On lap 18 most of the front-runners headed for the pits.

McLaren seemed to have used the opportunity to give Hamilton a heavier load of fuel: Kubica and Raikkonen both reached the pit lane exit before him. The exit light was red and Kubica and Raikkonen pulled up alongside each other, but Hamilton braked too late, swerved, and clouted the back of Raikkonen’s Ferrari. Then Rosberg piled in and hit Hamilton.

Raikkonen and Hamilton were out on the spot while Rosberg completed a lap and returned to the pits for a new front wing. Hamilton later suggested he’d seen the red light, but if he’d known it was on and he still didn’t stop in time it hardly exonerates him. The stewards agreed and docked him and Rosberg ten places on the grid for the next race in France. (Video of the Raikkonen – Hamilton – Roberg incident and more on the penalty here)

Glock is last of the late stoppers

Kubica was now the best-placed driver of those who had pitted once but ahead of him were several cars that hadn’t. His team mate Nick Heidfeld now led the race followed by Rubens Barrichello, Kazuki Nakajima, Mark Webber, David Coulthard, Jarno Trulli, Timo Glock, Giancarlo Fisichella and Sebastian Vettel.

As the race re-started on lap Felipe Massa surprisingly headed for the pits. He had been queued up behind Raikkonen but Ferrari brought him back in for fuel and to switch to the harder tyres.

Heidfeld quickly pulled away from Barrichello and pitted on lap 30 with enough of a lead in hand to come out directly in front of team mate Kubica. However on the next lap Kubica, still with one stop to make, slotted past Heidfeld, who was fuelled to the end, in a move that looked planned. Alonso, who had been behind Kubica, certainly didn’t find it anything like as straightforward to pass Heidfeld.

Nakajima was next to put on lap 33 shortly after Coulthard has passed him at turn ten. Barrichello clung on until lap 36 which underlined how impressive his qualifying performance had been. Team mate Jenson Button had started from the pit lane and made a pit stop under the safety car that appeared to take place while the pits were closed, although there was no news of any penalty.

Coulthard inherited the lead for one lap after Barrichello’s stop, then Trulli for two laps, and finally Timo Glock who stayed out until lap 41.

Meanwhile Massa had run wide trying to pass Webber but kept going and soon got ahead of the Red Bull driver. He then pounced on Nakajima when the Japanese driver made a mistake trying to pass Barrichello and hit the kerbs hard at the chicane at the end of the lap.

The Renault drivers were beginning to struggle with their brakes. Piquet had already spun on lap 29 and gave Massa a fright as he reversed back into position. He parked his car with destroyed brakes on lap 41.

Alonso in the other Renault was still struggling to pass Heidfeld and darted down the inside of the BMW driver at turn ten on lap 44. but he ran wide onto the marbles and Heidfeld took the place back. On the next lap Alonso lost the back of his R28 at turn seven and spun into the barrier and retirement. Word came from the pits that he also had problems with his gearbox.

Nakajima’s race also came to an end shortly afterwards. He’d tagged the back of Barrichello’s Honda at the crumbling turn ten and loosened his front wing. As he came into the pits for a replacement it folded under the car and put him into the barrier.

Fortunately for Kubica neither of these problems were enough to bring the safety car out and he pitted on lap 48 as soon as he had enough of an advantage over Heidfeld. That set BMW up for a one-two finish.

By now the state of the track was becoming a serious problem. Kovalainen scrambled past Barrichello at turn ten but both got onto the ‘marbles’ allowing Massa to pass the pair of them for fourth. But both the Ferrari and McLaren driver still had to pit one more time.

Fisichella spun off and nudged the barrier at turn four putting him out. But this too was covered without the safety car being needed as it seemed race control were doing everything in their power to avoiding its use, perhaps because of the threat of destroying someone’s race if they did.

Kubica now had the race in his hands providing he didn’t make a mistake. But it was clear from the drama around him just how difficult it was to avoid doing that.

Coulthard had risen to third but was struggling with his brakes. Barrichello cut across the apron at turns three and four, allowing the Toyotas of Glock and Trulli past. Rosberg also ran onto the marbles allowing Vettel (who had started in the pits) and Kovalainen though.

Massa now hauled in Trulli and got past with three laps to go. Trulli had been delayed by a mistake by Glock at turn two, allowing Massa to squeeze past. Glock held his fourth position to the flag, however, scoring his first point of the year at the circuit where he scored on his debut four years earlier.

Kubica, however, made history with a magnificent and only slightly fortuitous win at a circuit where he’d suffered a horrific crash twleve months previously. Heidfeld, second, did not look quite as thrilled on the podium. Perhaps his team mate’s obvious superiority this year has begun to rankle, or perhaps he though he could have won had Kubica not passed him after his pit stop.

Coulthard scored his first points of the year with third ahead of Glock, Massa, and Trulli. Kovalainen was right behind the seventh and eighth placed pair of Barrichello and Vettel at the flag but could not nothing to pass, leaving McLaren point-less. Rosberg, button, Webber and Bourdais were the other finishers, the latter having suffered a delay in his pit stop on lap 44.

Kubica’s victory means he is now in the lead of the championship race. But Hamilton went from looking a likely winner to facing no points and a compromised race weekend in France all because of one mistake he and his team could have taken steps to avoid.