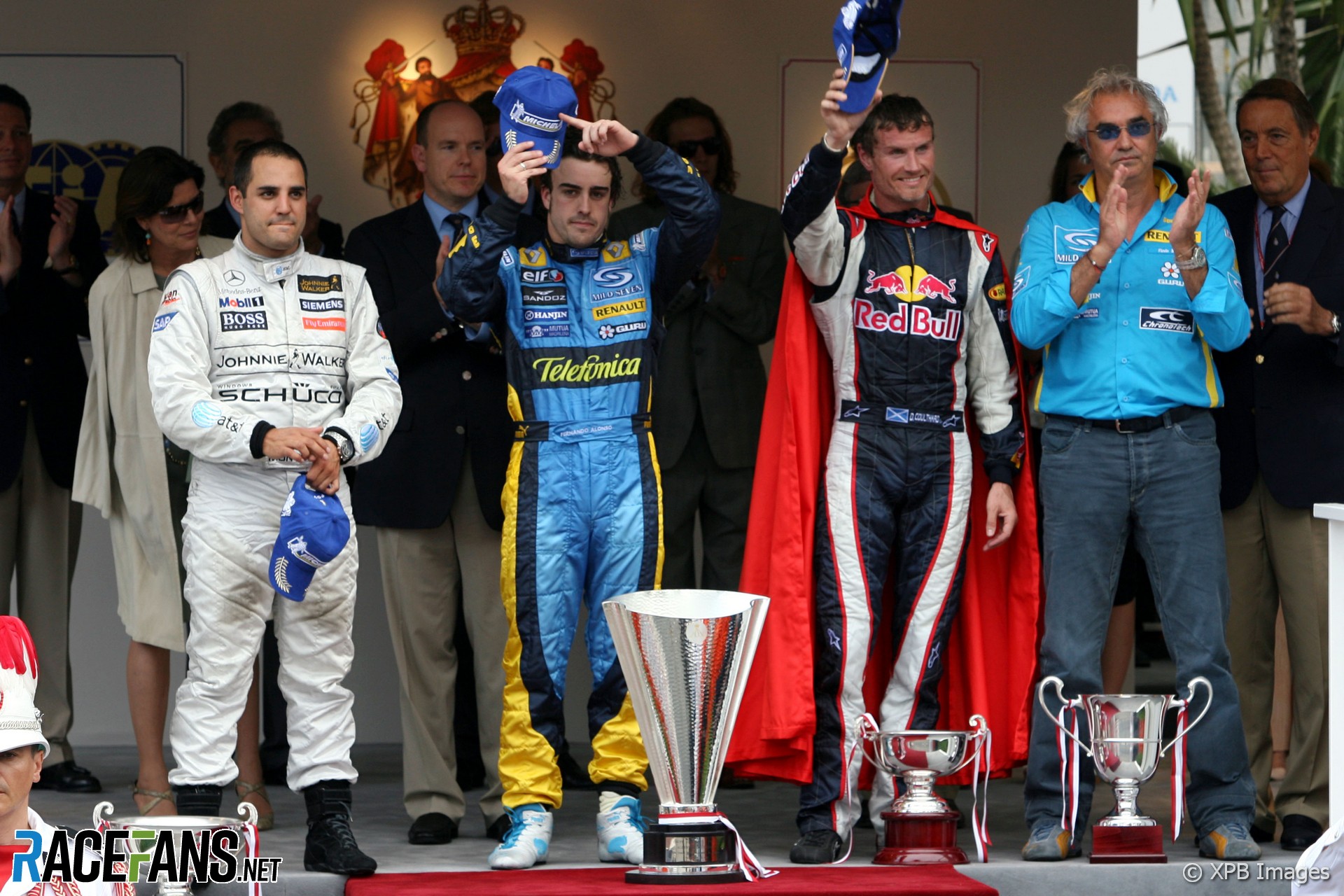 Fernando Alonso took his first win in the Monaco Grand Prix after all the other competitors dropped out of contention. Kimi Raikkonen and Mark Webber suffered car failures – and Michael Schumacher was sent to the back of the grid after a controversial qualifying session.

It was a surprisingly lively Monaco Grand Prix with shock retirements, the usual piles of traffic, and even some genuine overtaking. But Alonso’s triumph turns the screw yet further on his championship rivals.

There were 60 seconds left in the final qualifying session when Michael Schumacher crossed the second intermediate timing beam, 0.19s down on his best time so far. Further back Kimi Raikkonen, Juan Pablo Montoya, Mark Webber and Fernando Alonso were threatening to set faster times.

Felipe Massa crashed out earlier in qualifying – Schumacher could not rely on his support come the race. And now his provisional pole was seriously under threat.

So when did Schumacher decide to try to force a yellow flag that would ruin everyone else’s laps? The second he saw his split time? Or just as he turned into Rascasse?

Whenever he chose to make the move, the consequence was an impotent Ferrari 248 sat on the exit of Rascasse, no other driver able to improve their lap times, and outrage in the pits. Eight hours later, the stewards agreed that Schumacher’s move was deliberate, and sent him to the back of the grid.

On the strength of recent form, this would have gifted the win to Alonso. But today the Williams and McLarens were in rare form. Mark Webber elevated to second on the grid, lost out to Raikkonen on the second lap, but both kept Alonso honest during the first stint.

Further back Schumacher was making up for his Saturday transgression. He blasted past a meek Massa at Mirabeau and the two never saw each other again. While Schumacher sliced decisively past Midlands, Super Aguris and Scott Speed, Massa trundled along, seemingly completely disengaged.

Rubens Barrichello, too, was struggling. He consolidated his fifth on the grid from the line while Nico Rosberg leapt up from eighth to threaten him. Barrichello was fuelled for a single stop while Rosberg was trying to make headway on a two-stop fuel load. After 16 laps they were 30 seconds adrift of the leaders.

On lap 17 Christijan Albers got a driver-through penalty for causing avoidable contact on the first lap. The victim was his team mate, Tiago Monteiro, who had lost his front wing, so Midland’s race was ruined from the outset.

Michael Schumacher claimed 15th when he passed an ailing Jenson Button, suffering a terrible race in his Honda. Schumacher was now a minute behind Alonso, but thanks to Barrichello’s poor pace he was still within range of the points.

The pit stop sequence began on lap 21 with Montoya, followed by team mate Raikkonen. Both resumed easily clear of Barrichello. Rosberg made his stop on lap 24, resuming behind Schumacher.

Surprisingly the next stopper was Alonso on lap 24, leaving Webber in the lead. Many had suspected that Williams had taken their strong grid positions by running light, whereas Webber had in fact put in an excellent lap. His pit stop on the following lap wasn’t quick enough to move up, but it kept him in the hunt.

Fisichella, like Schumacher, had also been penalised after qualifying and dropped to ninth on the grid. His pit stop on lap 27 dropped him behind the German.

All the stoppers so far had planned on making a second stop. But Red Bull played a strategic masterstroke with David Coulthard, fuelling him until the end of the race when he stopped on lap 29, yet still able to return him to the circuit just ahead of Schumacher.

Alonso immediately struggled on his new set of tyres and by lap 33 there were only two seconds between the leader and Montoya in fourth. Three laps later the leaders were getting stuck into the heavy traffic – Button, Massa and Speed fighting over 18th.

While Alonso and Raikkonen made rapid headway Webber was finding the backmarkers unwilling to let three cars past at once. Massa put him over the kerbs at the harbour chicane. Only after that did Massa make his pit stop on lap 37, just after Schumacher had vacated the pit box.

Now the leaders got stuck into the biggest train of backmarkers – from eighth placed Nick Heidfeld to Nico Rosberg in fifteenth, separated by only four seconds.

As Alonso closed in on team mate Fisichella to put him a lap down, Fisichella began picking off the drivers in front of him. He dived past Coulthard at the chicane as much by accident as anything else, clipping the Red Bull’s wing but somehow not pulling it off. Jacques Villeneuve succumbed at the same corner on the next lap.

Unsurprisingly when Alonso got close Fisichella played the team game, baulking Raikkonen for a couple of corners while Alonso got away. But that paled in comparison to the series of laps Webber spent stuck behind Fisichella while the marshals inexplicably declined to blue-flag the Renault. Webber dropped to 8.2s behind Alonso due to scandalously poor race control.

But matters only got worse for Webber. On lap 46, having finally passed Fisichella, the Williams began belching flame and smoke and he pulled up at the pit lane exit. Once again a critical Williams failure had struck him while at the sharp end of the field.

The safety car period that followed unquestionably ruined the battle for the lead, but was good news for one-stoppers like Barrichello and Schumacher. The likes of Montoya, Fisichella and Button, running behind their respective team mates, all had their races spoiled as they were forced to wait for the team mates to pit first.

With Alonso and Raikkonen leading the field, the safety car restart would be crucial. But it never had a chance to materialise – Raikkonen’s McLaren burst into flames much like Webber’s Williams had done, on the approach to Portier. Now Alonso led with a buffer of seven lapped cars between himself and second-placed Montoya.

The battle for the lead was over. Raikkonen stomped off to his yacht.

The restart was straightforward, but not long afterwards the second Williams was out. Rosberg claimed his throttle had stuck open, forcing him into the barriers at Anthony Noghes. Christian Klien joined him in retirement shortly afterwards.

Barrichello had taken his only stop on lap 46 and just held off Jarno Trulli who had stopped with him. But he had broken the speed limit doing so and was hauled back into the pits for a penalty. This promoted Trulli to fourth ahead of Coulthard.

Schumacher might have capitalised too, but he was stuck trying to unlap himself from Alonso. Alonso eventually let him through to chase Barrichello to the finish.

With five laps to go Trulli’s miserable 2006 fortune caught up with him. His Toyota ground to a halt climbing the hill towards Massenet, robbing him of a deserved podium finish.

Not that the main beneficiary, David Coulthard, didn’t deserve one too. He had qualified extremely well, driven with all the maturity of his 201 starts, and Red Bull had supplied a strong car and strategic nous.

Schumacher made a last-gasp attempt to pass Barrichello on the final lap, just as he did in 2006, but it was to no avail. Behind sixth placed Fisichella, attrition promoted Ralf Schumacher and Nick Heidfeld to seventh and eighth.

Alonso was a worthy winner, especially in light of Saturday, but this wasn’t won solely on speed. Williams and McLaren stretched themselves to breaking point to run cars that could keep up. And Schumacher, psyched out by Alonso’s unrelenting form, took care of himself with another moment of madness.